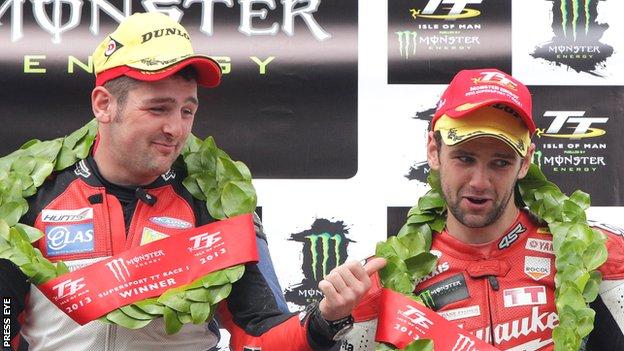 The younger Dunlop brother was second in the Supersport 600cc behind older brother William, who also won the 250.

Elkin was riding a Moto3 machine round the three-mile circuit.

Englishman Guy Martin led the Open race for the first two laps but had to settle for second behind Ballymoney rider Michael Dunlop.

Michael, who clinched a treble at Armoy last year, came in ahead of brother William in the feature Race of Legends event with Derek Sheils completing the podium.

Martin was also an early leader in the Supersport 600 but was passed by the Dunlops with William securing victory by a margin of 0.6 seconds over his brother, who set a new lap record at 103.19mph.

Hamilton edged out KMR Kawasaki team-mate McWilliams by eight hundredths of a second in the Supertwins.

Former Grand Prix rider McWilliams was making his national road race debut at the County Antrim course and established a new lap record for the class at 97.07mph.

Conor Behan won the Senior Support race from Mark Hanna and Shane Egan, with Hanna taking the Junior Support honours ahead of Behan and Egan.