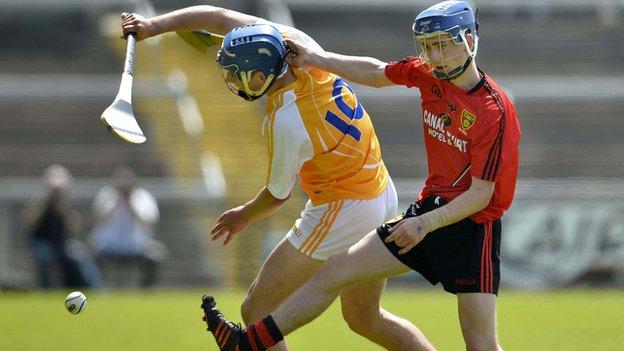 The game at Ashbourne had to be abandoned in the closing stages after McCurdy collided with a team-mate.

However, the Antrim player tweeted on Monday that he had sustained "no serious damage".

Waterford were leading 4-20 to 1-9 at the time of the abandonment and their victory was confirmed on Monday.

With McCurdy continuing to be treated, Limerick official Justin Heffernan eventually abandoned the game but Waterford's place in the All-Ireland semi-final against Kilkenny at Croke Park on 11 August was announced by the GAA on Monday afternoon.

According to the GAA rule-book, an abandoned match must be re-fixed.

However, Waterford officials were adamant that the GAA would confirm on Monday that the beaten Munster finalists would be awarded victory in the match.

Waterford caused Antrim huge problems throughout and led by 1-11 to 0-4 at half-time, with Patrick Curran netting a 14th minute goal.

Antrim outscored Waterford by three points to two inside four minutes of the restart, but Waterford exerted firm control once more.

Goals from Stephen Bennett and Patrick Curran ensured a 3-16 to 1-8 lead with 14 minutes remaining, with Waterford adding their fourth goal late on, before the game was abandoned.