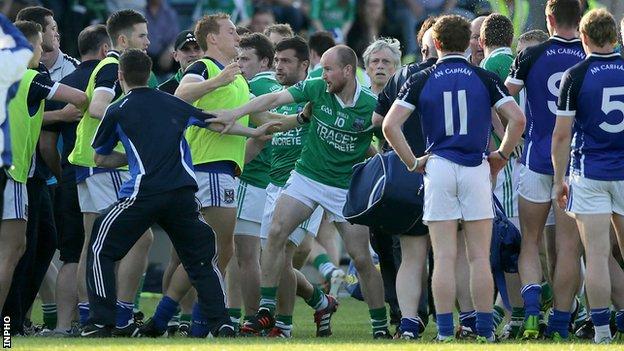 Fermanagh and Cavan have each been fined 5,000 euro by the GAA as a result of a half-time scuffle on 13 July.

The melee took place as the players were leaving the Breffni Park pitch during an All-Ireland qualifier which Cavan won 1-14 to 0-10.

Erne county forward Sean Quigley was sent-off for his part in the incident but has appealed against a suspension.

Fermanagh said they had sought a hearing with the Central Hearings Committee about their fine.

Last week Cavan successfully appealed against an eight-week ban which had been given to selector Anthony Forde in relation to the half-time melee.

However, their 5,000 euro fine was confirmed.

Meanwhile, two other counties have been fined 5,000 euro following a brawl in another All-Ireland qualifier.

Wexford and Longford will have to cough up after the incident at Pearse Park, also on 13 July.

Longford, however, have indicated they will contest their fine with the Central Hearings Committee.