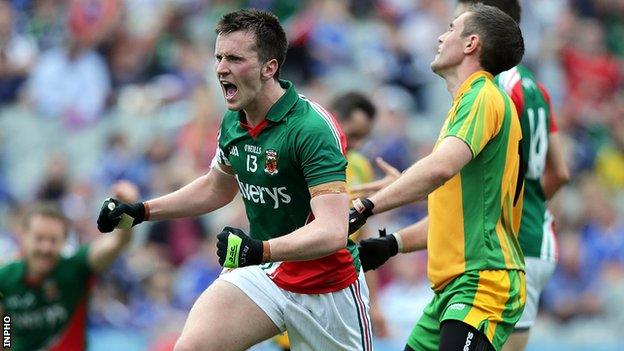 Mayo produced a stunning performance of power and pace to humiliate champions Donegal in a remarkable All-Ireland Football quarter-final at Croke Park.

Goals from Cillian O'Connor and Donal Vaughan had Mayo 2-3 to 0-3 ahead by the 13th minute.

Donegal's dismal day included Eamonn McGee's straight red card for a rather ugly stamp on Mayo sub Enda Varley with 18 minutes left while Mayo were also reduced to 14 players in injury-time when man of the match O'Shea picked up a second yellow card.

Pre-match predictions that this would be a turgid low-scoring contest proved wide of the mark as Mayo simply blew the champions away with a wonderful display of running football to avenge last year's All-Ireland Final defeat.

Granted, Mayo, exemplified by man-mountain O'Shea, also had the physique to out-muscle the fading champions but this victory was founded predominantly on speed and movement.

But while Mayo were exceptional, there was little doubt that Donegal were a pale shadow of that side that dominated last year's championship with injuries to key players also demonstrating a lack of depth in Jim McGuinness's squad.

Mayo showed their intent by racking up 1-3 before Donegal had even troubled the scoreboard.

O'Connor and Alan Dillon hit the Connacht champions's opening points and the Donegal net rattled for the first time in the fourth minute as O'Connor squeezed in a shot from a tight angle after Eamonn McGee had been dispossessed following a Keith Higgins long ball.

The lead was six as Alan Freeman swung over another score on six minutes before Donegal threatened to get back into the contest as they notched three unanswered points with two Murphy frees split by a fine Mark McHugh effort.

But Donegal were rocked ball on their heels within two minutes as the lively Dillon set up Vaughan to score into an empty net after surprise late inclusion McHugh had been caught in possession near halfway.

While Murphy did respond with a further free in the 16th minute, Donegal were not to register a further score until David Walsh's 48th-minute point.

In contrast, the rampant westerners notched seven further points before the break and the unbroken sequence of Mayo scores extended to 2-9 before Walsh's score.

Jim McGuinness introduced Karl Lacey for injured Anthony Thompson in the 23rd minute but Kevin McLaughlin, Andy Moran, Freeman, O'Connor and Colm Boyle were on target before the break with McLaughlin also missing another glorious Mayo goal chance after sub Cathal Carolan has struck the woodwork.

O'Connor stroked his second goal into the empty four minutes after the restart after another surge upfield by the brilliant Vaughan and completed his hat-trick on 45 minutes after Moran's shot had been saved by Paul Durcan.

Things went from bad to worse with McGee's silly sending-off on 52 minutes and Mayo's strength in depth was shown by fine scores from substitutes Richie Feeney, Varley, Chris Barrett and Kevin Keane.

Donegal were 22 points in arrears with 14 minutes remaining (4-15 to 0-5) and while they did outscore Mayo 1-5 to 0-2 in the remainder of the contest, they were no hiding the gulf between the two teams on the day.