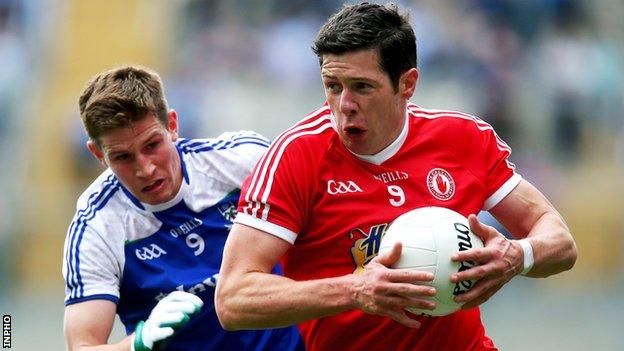 Martin Penrose was sent off before the start of the second period arising from a scuffle at the end of the first half.

Monaghan's Kieran Hughes was dismissed on 48 minutes but they levelled at 0-9 to 0-9 and 0-12 to 0-12 before Tyrone hit the decisive closing points.

Monaghan will look back on Stephen Gollogly's failure to convert a glorious goal chance at the start of the second half.

Gollogly had only Pascal McConnell to beat from point-blank range after the Tyrone keeper attempted to take a short kick-out but the Monaghan forward blasted the ball over the bar when a goal seemed certain.

Another talking point with be Sean Cavanagh's cynical, albeit understandable, foul on Conor McManus in the 49th minute as Monaghan's best forward looked set to go for goal.

A 13-metre free yielded a point for McManus but Cavanagh's yellow card for the rugby-type tackle looked a more than satisfactory outcome for the Red Hands.

Two minutes later, Tyrone were ahead again after a Mattie Donnelly point and while Monaghan were on terms at 0-12 to 0-12 by the 63rd minute, Cavanagh sealed his team's win with the final point.

Tyrone's winning margin could have been bigger at the finish as Conor Clarke - deployed at full-forward in the closing stages - hit the underside of Rory Beggan's crossbar with three minutes of normal time left with a full-blooded goal attempt.

Just as had been the case in the Ulster final, Monaghan made a fast start as two McManus points helped them lead 0-4 to 0-1 by the 10th minute.

The lead was still three at 0-5 to 0-2 when arguably the first big turning point arrived as Darren Hughes received a harsh yellow card for what appeared to be a perfectly legitimate challenge on Cavanagh.

Hughes's subsequent and understandable inhibition in the remainder of the first period allowed Cavanagh to make a major impact on proceedings.

Three points in as many minutes- including a superb Cavanagh score after his charge upfield - got the Red Hands on terms by the 20th minute and while McManus restored Monaghan's lead, Paul Finlay missed a simple free to extend his team's advantage and Tyrone responded with four unanswered scores.

Cavanagh was aided and abetted in that period of dominance by Joe McMahon as the two Tyrone strong men both swung over two glorious points.

McManus stopped the rot for Monaghan with their first score in 13th minutes before the break as the half ended amid scuffles with Dessie Mone, Penrose and Conor Gormley among the players involved.

There was a suspicion that referee Cormac Reilly might consider retrospective action at the interval and so it proved as he handed Penrose a straight red card for his raised hand on Mone.

With Dick Clerkin and Christopher McGuinness replacing the yellow carded Dermot Malone and Padraig Donaghy, Monaghan appeared rejuvenated and they should have taken the lead two minutes after the restart as Gollogly blazed his glorious chance over the bar.

But the force appeared to be with Monaghan as Clerkin swung over a glorious levelling point with the outside of his right foot in the 41st minute.

But despite having the majority of possession for the next couple of minutes, Monaghan couldn't edge ahead and Tyrone were two clear again by the 47th minute after scores from the hitherto subdued Peter Harte and Ciaran McGinley.

It was Monaghan's turn to be reduced to 14 players a minute later as Kieran Hughes was dismissed after a second yellow card for a high challenge on Mark Donnelly.

It wasn't the most dangerous of tackles but given the circumstances of the game was a highly unwise intervention.

Despite the departure of Hughes, Monaghan hit three of the next four scores to level the contest with seven minutes of normal time left.

Monaghan's period of superiority was started by McManus's 49th-minute point after Cavanagh's controversial tackle on the Farney forward.

It wasn't a pretty moment in gaelic football and is one that will be discussed at length in the days and weeks ahead.

The game was in the melting point as McManus's sixth point of the game levelled proceedings but Tyrone were ahead again within a minute after a point from sub Ronan O'Neill.

Conor Clarke nearly killed off the Farney men with his thunderous shot onto the crossbar three minutes from time but Cavanagh extended the lead a minute later and Tyrone were able to comfortably run down the clock in the closing stages.