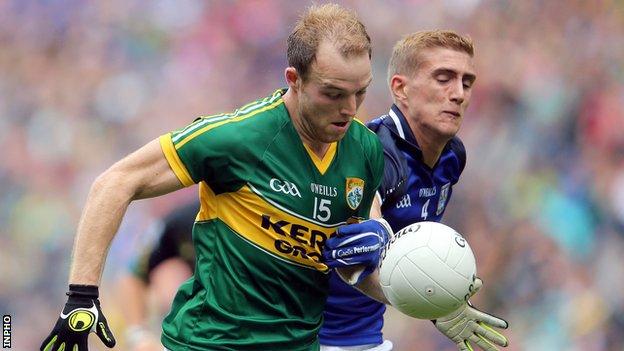 Kerry rarely had to get out of third gear as they strolled to a six-point victory over a disappointing Cavan team in the All-Ireland SFC quarter-final.

Martin Dunne hit the opening point of the game for Cavan but Kerry responded with nine straight scores.

But there was more than a suspicion that Kerry had eased off and they were never in any danger of being caught.

Cavan appeared to suffer badly from stage fright in the first half as the Kingdom were able to stroll through the Breffni defence at will on numerous occasions.

Dunne slotted a nice point from a tight angle in the fourth minute but Kerry's complete domination in the middle third of the field then saw the Kingdom pull away from Terry Hyland's side.

Kerry appeared to be denied a blatant penalty in the fifth minute after Rory Dunne hauled down Kieran Donaghy.

To give Dunne credit, he was Cavan's best performer in the contest as he largely subdued full-forward Donaghy.

But too many of Dunne's colleagues were not able to reproduce their displays of recent games.

The impressive Donnchadh Walsh (0-2), Johnny Buckley (0-3), Colm Cooper (0-2), Declan O'Sullivan and Donaghy were on target as Kerry hit their nine unanswered points to lead by eight after 27 minutes.

David Givney stopped the rot with a score on the half-hour but two more Cooper points left Kerry nine ahead at the interval.

Niall McDermott's introduction helped Cavan to improve in the second period and the sub notched the first two scores after the restart.

A big Kerry win still appeared on the cards when they led 0-14 to 0-6 but Cavan then hit three unanswered points, courtesy of two Eugene Keating frees and a Cian Mackey point.

At that stage, the Kingdom appeared to have taken their foot off the pedal and indeed Cavan wasted further opportunities to cut into Kerry's lead as Keating, Killian Clarke and McDermott all fired bad wides.

But a comeback never really looked on as Cooper steadied any Kingdom nerves with the final score of the game.