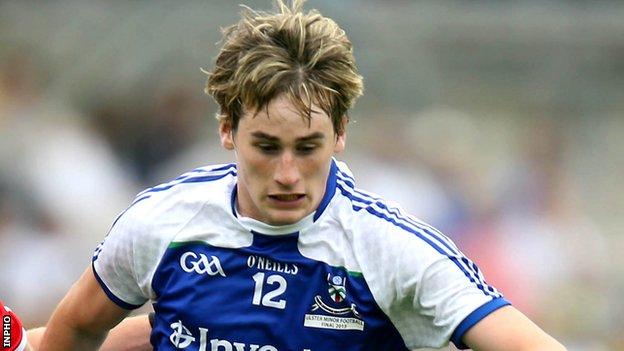 Conor McCarthy and Ferghal McMahon scored four points each in Monaghan's 0-12 to 0-9 win over Tipperary in the All-Ireland Minor quarter-finals.

Trailing 0-5 to 0-4 at half-time, the Ulster county began the second period by scoring three straight points and went on to win by three.

They had Michael O'Dowd sent off in injury-time for a second yellow card.

Monaghan, seeking their first final appearance for 74 years, play Mayo in the semis on 25 August at Croke Park.

Mayo beat Westmeath 2-13 to 0-8 thanks to goals by Cian Hanley and Darragh Doherty.

Roscommon beat Kildare 3-8 to 0-12 at Tullamore to qualify for a semi-final clash with Tyrone.