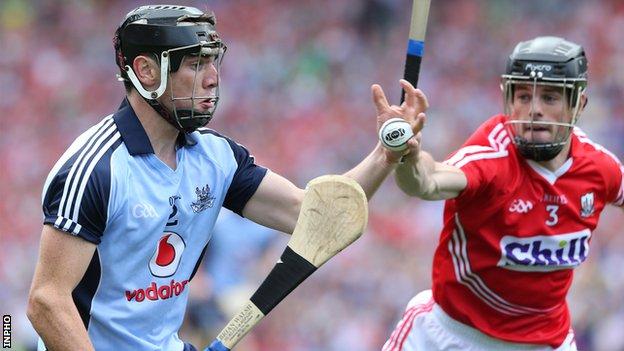 A late goal by Patrick Horgan helped Cork edge out heartbroken Dublin 1-24 to 1-19 in a thrilling All-Ireland Hurling Semi-Final at Croke Park.

The sides went point for point for most of the game with Cork lead 0-15 to 1-11 at the break despite David Treacy's 30th-minute goal for the Dubs.

The dismissal of Dublin's Ryan O'Dwyer after a second yellow card in the 49th minute was a huge moment in the game.

In the end, Cork's greater composure swayed the game in their favour.

The game was played in front of 62,092 enthralled spectators with Dublin attempting to qualify for their first hurling decider in 52 years.

Cork, aiming to make their first final since 2005, led 0-3 to 0-1 early on but Dublin then notched three successive scores to edge into the lead.

Treacy then kicked in Dublin's goal to put the Leinster champions ahead but they missed a number of excellent other point-scoring chances to increase their lead during a period of dominance and Cork finished the half the stronger to edge into a 0-15 to 1-11 lead by the break.

Dublin were ahead at 1-15 to 0-16 10 minutes into the second half after points from substitute Shane Durkin, Danny Sutcliffe and Paul Ryan.

But the Dubs then suffered a huge blow when O'Dwyer was dismissed on 49 minutes after a frontal charge on a Cork player.

Indeed, Nash became the pivotal participant in the contest as he slotted three points from frees in the closing stages.

Despite being down to 14 players, Dublin had chances to get on terms with the Rebels but a couple of bad misses was to cost the Leinster champions.