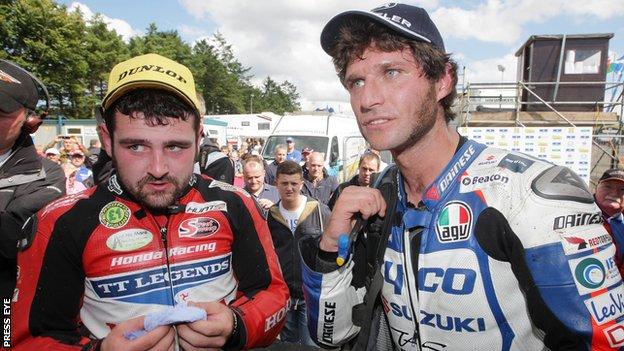 Guy Martin clinched a Ulster Grand Prix treble as he won both Superbike races and also took a Supersport victory to bring his Dundrod career haul up to 11.

Martin, 31, edged out Michael Dunlop in the main Superbike race and then held off Bruce Anstey in the second Superbike and opening Supersport races.

There were also wins for Ivan Lintin and 50-year-old Ian Lougher.

Michael Dunlop won the Superstock race with Lintin and veteran Welshman Lougher taking victories in the Lightweight and Ultra-lightweight classes.

Lincolnshire rider Martin and Dunlop both had to dice with backmarkers over the closing two laps in the main Superbike race as they battled for the £4,000 first prize.

The Englishman was clear of the field after the opening lap but Dunlop was on Martin's tail by the end of the third circuit in the seven-lap race.

Dunlop continued to chase Martin for the remainder of the race and there was only .05 of a second between the two riders at the finishing with William Dunlop 10.67 seconds adrift.

With Michael Dunlop exiting early in the second Superbike and William Dunlop a late retirement while challenging for a podium position, Martin completed his treble by taking a convincing victory ahead of Anstey and Conor Cummins.

Earlier, Martin had won a thrilling opening race as he held off Anstey to triumph in the Supersport One class.

Martin, 31, held the advantage for most of the race but the lead swapped hands between him and 44-year-old New Zealander Anstey over the closing lap.

Lee Johnston, 24, took the final podium spot ahead of Lougher.

The action was even more exciting in the second Supersport race as William Dunlop edged out Anstey in a quite brilliant duel.

Dunlop led for most of the race but Anstey looked set to have snatched victory at he took the lead late in the final lap only for the William to regain the advantage with a dramatic move on the final corner.

Just what the victory meant was evident by William Dunlop's emotional reaction to his victory as his tears well up.

Dunlop's Milwaukee Yamaha team-mate Cummins wasn't far behind in third after narrowly avoiding colliding with Guy Martin when the Englishman's Suzuki lost power early in the race while Michael Dunlop was fourth.

Competing in his final Ulster Grand Prix before his retirement, veteran Lougher achieved his 18th win at the Dundrod meeting in the re-started Ultra-Lightweight/125cc event just ahead of Christian Elkin.

Lincolnshire success continued in the Lightweight/Supertwins race, run concurrently with the Ultra-Lightweight event, as Lintin finished inches ahead of Jamie Hamilton with Lee Johnston and Derek McGee close by in third and fourth.

Another Lincolnshire rider Gary Johnson led over the opening two laps in the Superstock race but he ran wide at the hairpin on lap three which allowed Michael Dunlop to take the lead.

With the conditions drying, the 24-year-old Ballymoney man extended his advantage over the closing three laps with Johnson remaining in second and Anstey pipping Dean Harrison for third spot and the top six completed by Lougher and Dubliner Derek Sheils.

In the opening Supersport race, there was only .07secs between the leading duo at the finish as Martin edged out Anstey.

Welsh veteran Lougher appeared on course for the third place but was passed by Fermanagh native Johnston in the closing stages.

Martin's win came after he agreed a one-year contract extension with the Tyco Suzuki team for the 2014 campaign.

After the abandonment of Thursday's Dundrod 150 meeting scheduled to take place on the seven-mile circuit, rain again fell on Saturday morning but the conditions improved steadily as the day went on.