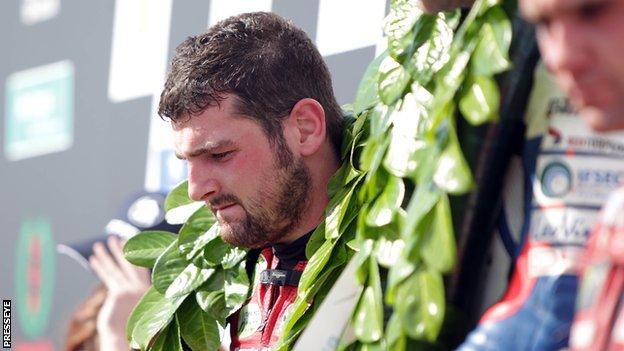 Dunlop had started the race as a strong favourite after dominating practice and led from start to finish despite suffering major clutch difficulties.

Honda-mounted William Dunlop was second in Saturday's opening event, the 500cc Classic TT, which was won by England's Ollie Linsdell on a Paton.

Jamie Coward completed the rostrum, with Michael Dunlop back in seventh.

William, the elder of the Dunlop brothers, suffered misfortune in Monday morning's 350 Classic when he retired at Ballaugh Bridge.

Jamie Hamilton had a poor start but had moved up to seventh by the end of the second lap, before coming off unhurt at Parliament Square.

Palmer made it a double success by taking victory in the Formula 2 class, in which Banbridge rider Shaun Anderson finished fifth.

Michael lapped at 123.68mph on his opening lap in the Formula One event.