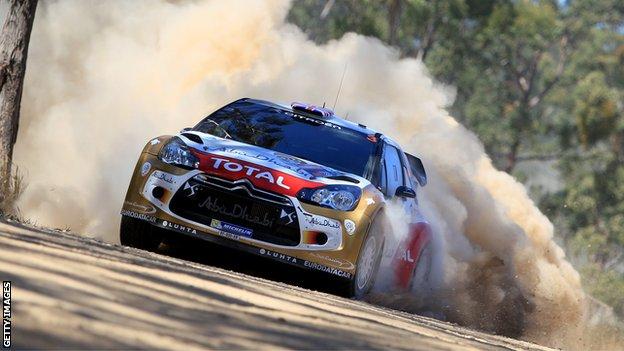 Northern Ireland driver Kris Meeke suffered huge disappointment after crashing out of the World Championship round in Australia on Saturday.

Meeke, competing as a guest driver for Citroen, was in fourth place when his car slid off the road on stage 13.

The Dungannon man acknowledged that his failure to complete the rally could be a major blow for his career.

"I was given instructions to have a clean race here and I haven't done it," he said.

"So we'll have to see what the outcome is."

In August, Meeke and co-driver Chris Patterson had been lying fifth in Rally Finland when they crashed out on the penultimate stage.

That race saw Meeke, the 2009 Intercontinental Challenge champion, make his return to the World Rally scene after 18 months out.

Tyrone man Meeke had not competed in a World Championship event since his involvement with the Mini team in 2011.

Meeke and Patterson had been retained by Citroen for Rally Australia after Spanish driver Dani Sordo agreed to sit out the round.

The Northern Irish duo were unhurt after their car rolled seven times down a hillside after Saturday's crash.

"I went into a second gear corner and I arrived five or 10k too fast. I thought I'd got away with it, but the car just slipped off the road," said Meeke.

Meeke acknowledged that his latest exit had left him with "not a great feeling at the moment".

"I'm thankful for the opportunity but sorry I couldn't deliver on my instructions.