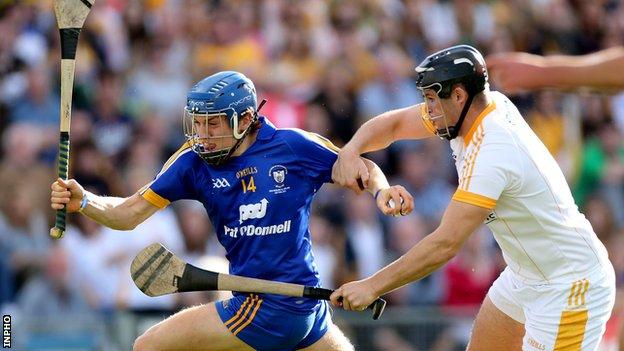 Clare crushed Antrim 2-28 to 0-12 in Saturday's All-Ireland Under-21 Hurling final at Semple Stadium.

There was never any prospect of Antrim repeating their shock semi-final heroics as the Banner County completely dominated the contest.

Antrim were 0-4 to 0-2 down early on but Clare then hit an unanswered 1-10 with Davy O'Halloran finding the net.

A Shane O'Donnell goal extended Clare's lead to 2-16 to 0-4 at half-time and made the second half a non event.

With Clare able to withdrew their senior bigs guns such as David McInerney and Podge Collins ahead of the All-Ireland Senior Final replay in two weeks, the level of the Banner performance did drop somewhat in the second period.

However, the defending champions still outscored the Saffrons 0-12 to 0-8 as they went on to complete a 22-point victory.

Antrim had caused one of the biggest sporting shocks of 2013 in beating a highly-rated Wexford team in the semi-final three weeks ago as they became the first ever Ulster team to progress to the under-21 decider.

However, few pundits gave the Saffrons much chance of upsetting a Clare side which many in the know reckon are possibly the best under-21 side in the history of the game.

McInerney and Collins were joined in the team by other All-Ireland senior final starters Tony Kelly and Colm Galvin and in all the Clare team included 14 members of Davy Fitzgerald's extended panel.

Immediately before the game, Antrim manager Kevin Ryan acknowledged that his team would need to stay with the Banner boys early on but the very opposite happened as Clare forged a 0-12 to 0-2 lead by the 20th minute.

The Saffrons did start promisingly enough as Conor McCann responded to Cathal O'Connell's two early points and Ciaran Clarke then wasted a free-taking chance to level the game.

After two further O'Connell and Galvin points, Jackson McGreevy swung over a fine Saffron point but Clare responded by slotting nine unanswered scores over the next 10 minutes to kill off the contest.

Clare were utterly dominant in all sectors of the field as Gabriel Malone, Kelly, Cathal Malone and man of the match O'Halloran all helped themselves to points which added to O'Connell's unerring accuracy from placed balls.

O'Halloran stroked in Clare's first goal on 24 minutes after Mattie Donnelly had misjudged a long ball and the second three-pointer came must before half-time as O'Donnell fired a glorious angled shot past Ger Dixon.

With Clare inevitably easing off, the second half wasn't quite as traumatic for the Saffrons.

At one stage, the Antrim even hit three unanswered scores with two Clarke frees split by a Chris McGuinness point.

McGuinness had been a late inclusion in the Saffron line-up after injury doubt Ciaran Johnston had been ruled out by a knee injury.

Keeper Dixon helped keep the score down with a great double save to deny O'Donnell and O'Halloran as both teams introduced several substitutes.

Antrim assistant boss Neil McManus, who had admitted before the match that any thoughts of a Saffron County victory was "unrealistic", praised the team after the defeat.

"Thanks to everyone all around the country for the messages of support for our under-21 All-Ireland finalists. Very proud of all the lads," said McManus on Twitter.