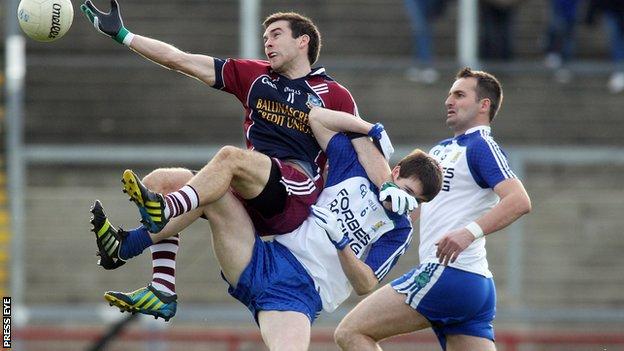 Ballinderry won the Derry Senior Football Championship for a third year in a row by beating Ballinascreen 3-10 to 2-07 at Celtic Park.

The Shamrocks were seven points up at half-time after two goals in a minute from Darren Lawn and Michael McIver.

Ballinascreen had led early on with midfielder Mickey McBride netting.

The underdogs got a second goal right at the end through Paul Burns but missed two penalties when Benny Heron shot wide and hit the crossbar.

It was Ballinderry's 13th Derry crown and the match saw veteran Oak Leafer Enda Muldoon come on as a second-half replacement to make his 12th county final appearance.

Ballinascreen made a good start and were 1-2 to 0-2 up thanks to McBride's goal and a point, and the opening score from Seamus McBride, with Ryan Bell and Collie Devlin getting the Ballinderry scores.

But then the Shamrocks took over, scoring 2-4 without reply for a 2-6 to 1-2 half-time advantage.

Lawn shot high into the net in the 22nd minute and then McIvor's close-range finish had Ballinascreen reeling before captain Conor Nevin advanced from defence for the last point of the half.

Ballinascreen should have been three points closer but Heron placed his penalty wide after Gareth McKinless had been guilty of a foot block.

In the second half, Daniel McKinless went in bravely to claim the third goal for Ballinderry.

Ballinsascreen kept going and got points from play through Carlus McWilliams and Seamus Bradley (2).

Heron struck the crossbar with his second penalty before Burns netted with virtually the last move of the game.