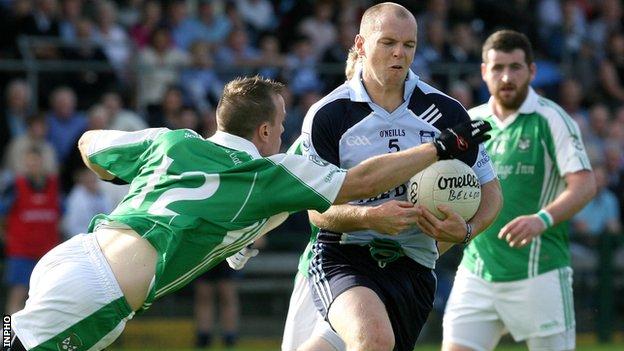 Roslea secured a third Fermanagh club title in four years by beating Belcoo 1-12 to 1-9 in the Brewster Park final.

Roslea led 1-5 to 0-5 lead at the break but Belcoo levelled six minutes into the second half thanks to a Stephen Maguire goal.

Belcoo's Paul McGrath saw his penalty saved by Sean Boyle as Roslea went on to seal a three-point success.

Joanthan Feeley scored three first-half points for Belcoo and he was denied a goal by the woodwork as the underdogs dominated.

However, they failed to make it count on the scoreboard and their missed chances were punished with Quigley's strike on the stroke of half-time.

Maguire's equalising goal was followed three minutes later by James McGrath making a good save to keep out a Seamus Quigley effort.

The penalty miss on 47 minutes proved crucial, with Boyle the Roslea hero after Stephen Maguire was blocked by Dermot Reilly.

Roslea moved clear with the Quigleys, Sean and Seamus, accounting for all seven of their second-half points.