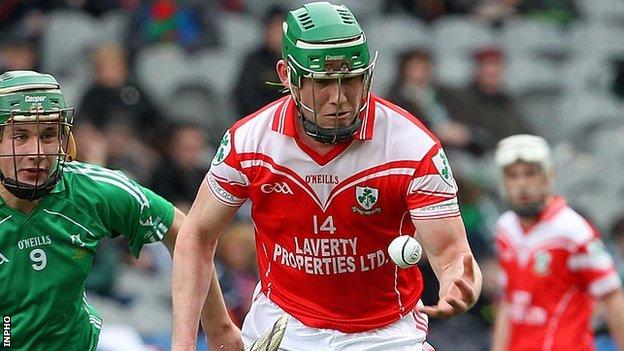 Former Ulster Club Hurler of the Year Joey Scullion will miss Loughgiel's Ulster SHC semi-final with Ballygalget on Sunday because of a thumb injury.

The 28-year-old shattered his thumb in Shamrocks' 16-point win over Portaferry in the Antrim Senior League last week.

The injury is expected to keep him out of action until after Christmas.

"The injury is worse than I initially thought. The bone is shattered so they are afraid to operate on it at the moment," Scullion revealed.

"I'm just in limbo at the minute to see what is going to happen, but I'm certainly looking at a minimum of 8 to 10 weeks before I can get back training, and obviously it will be longer before I can play competitively again."

It's a big blow to the 2012 All-Ireland Club Champions, who recently captured their 19th Antrim SHC title and their fourth in succession, as they embark on another Ulster campaign this weekend.

"It's disappointing, but there's never a good time of the year to get injured. Whenever you train hard all year it's all geared towards the Championship. It just came at a very bad time for me.

"As far as the team is concerned we have a very strong panel and there are plenty of young boys coming in there with experienced guys as well who can step in and do the same job."

Meanwhile a memorable season for Antrim Under 21 hurlers has been capped off by the inclusion of Ballycastle duo Stephen McAfee and Ciarán Clarke on the inaugural Under-21 Hurling team of the Year.

Both McAfee and Clarke played vital roles as the Saffrons booked a place in their first ever All-Ireland Under-21 Hurling final, only to succumb to Clare, who dominate the selection with eight players.

Losing out for Antrim were defender Tiernan Coyle and midfielders Jackson McGreevy and Eoghan Campbell, who were also nominated.

McAfee delivered a man-of-the-match display, scoring 1-4 in the semi-final win over Wexford, while Clarke top-scored with 1-5.

"Looking back on it again, that was some win for ourselves, and I just can't believe that both Clarkey and I have been honoured on the team of the year," he said.

"That semi-final win over Wexford was special, no one gave us a chance, but we were determined to prove the critics wrong. The important thing is to make sure that it's not a flash in the pan and that Antrim as a county build from it.

"There's great talent in Antrim, and hopefully it encourages more players to get involved and that there is more of a focussed approach across the board in the coming years."