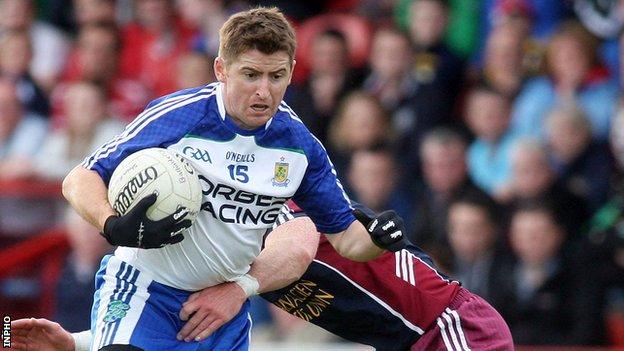 Ballinderry led from start to finish to see off Clonoe by 0-14 to 0-10 in Sunday's preliminary round clash in the Ulster Club Championship.

The Derry side always had the edge although they never completely killed off the challenge of the Tyrone title holders at Celtic Park.

Aaron Devlin put the Shamrocks into the lead in the first minute and they stayed in front until the finish.

Ballinderry face Scotstown of Monaghan in the quarter-finals at Clones.

It had looked ominous for Clonoe when Ryan Bell and Darren Lawn added to the opening score to put Ballinderry three points up after six minutes.

Dan McNulty scored from play to get the Tyrone club on the board but Ballinderry went on to be 0-8 to 0-4 up at the break.

Two frees by Conor McAliskey and a score from play by PJ Lavery accounted for Clone's other points before the interval.

Clonoe got the first two points of the second half through Peter Lavery and Conor McAliskey to make it a two-point game but Ballinderry responded with two fine points by Bell.

The Derry side kept their noses in front with Gilligan, Aaron Duke, Bell and Devlin adding to their tally.

The Tyrone side's cause was not helped as they lost forward McAliskey with a shoulder injury.

Clones will be the venue for Ballinderry's last eight clash with Scotstown.