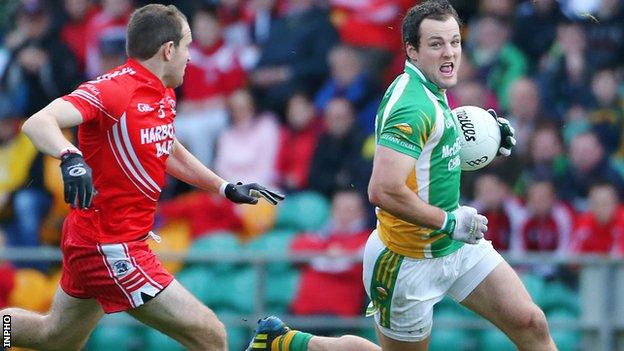 Michael Murphy inspired Glenswilly to the Donegal club title on Sunday, less than 24 hours after skippering Ireland in the Rules victory over Australia.

Murphy netted a first-half penalty in the 3-19 to 2-6 win over Killybegs.

Christopher Murrin and Hugh McFadden netted for Killybegs as Glenswilly led 1-7 to 2-3 at the break in Ballybofey.

Glenswilly surged clear after a Neil Gallagher goal and Killybegs' Jason Noctor was sent-off before Ciaran Bonnar netted to seal the victory.

Murphy led Ireland to a 57-35 victory over the Aussies in the first International Rules Test at Breffni Park on Saturday night.

There were no signs of fatigue as he helped Glenswilly to a second Donegal club triumph in three years.

Murphy slotted over the opening point but Killybegs moved ahead when Murrin's high ball bypassed keeper Philip O'Donnell to find the net.

Murphy converted a penalty after Colin Kelly was dragged down although Killybegs were back in front as Hugh McFadden palmed the ball in.

Just a point separated the sides at half-time, with Murphy scoring 1-3 of the Glenswilly total.

Brendan Faherty levelled on the restart but Glenswilly took control after Gallagher netted at the second attempt from Murphy's pass.

Glenswilly were four clear when Noctor was sent-off for a second yellow card and Bonnar added a third goal before man-of-the-match Murphy fittingly scored the last point of the game.

The reward for Glenswilly is an Ulster quarter-final clash against Antrim champions St Gall's.