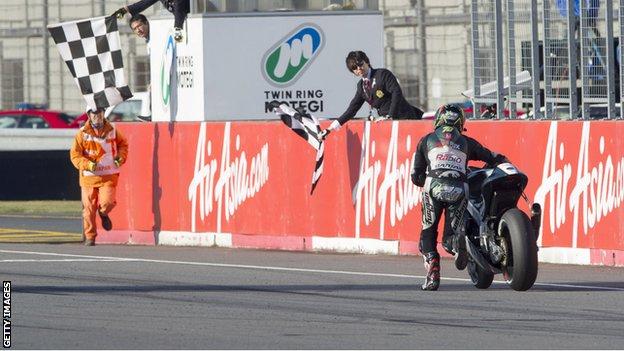 Michael Laverty was 19th in the Japanese MotoGP as he was forced to push his bike over the finishing line at the end after running out of petrol.

Laverty's only points finish of the season remains his 13th place at Jerez in May.

Despite his last-lap troubles, the Toomebridge man said that he had "enjoyed the race" at Motegi

"On the final lap nursed it round and had to push the final 100 metres," Laverty said on Twitter.

Laverty is expected to remain in MotoGP with the Paul Bird team for 2014.

Pole-sitter Lorenzo, 26, led from start to finish for his second successive win and cut Marc Marquez's lead at the top of the standings to 13 points.

The result means the championship will be decided in Valencia on 10 November, where a fourth-place finish will guarantee Marquez becomes the youngest champion in the 64 years of the premier class of grand prix racing.