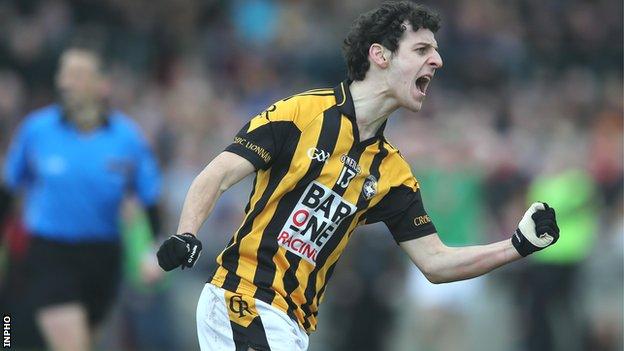 Clarke remains in the United States and is unlikely to return before Christmas.

The Cross player was sent-off in last year's Ulster club final against Kilcoo after receiving a second yellow card.

Crossmaglen claimed their 17th Armagh county title in 18 years by beating Cullyhanna, having also seen off Pearse Og and Maghery in previous rounds.

Last year's Ulster decider between the two sides, which Cross won by six points, was marred by a racism controversy.

Clarke informed Armagh county and Crossmaglen officials of his intention to travel in November 2012, thereby ruling himself out of the entire 2013 season.

He later agreed to return in time for the Championship but left for New York again after Armagh's defeat at the hands of Galway in the qualifiers on 20 July.

David McKenna was also absent for much of the Armagh campaign, but returned in time for the semi-final.

Kilcoo boss Jim McCorry has now led his side to three Down SFC titles, the outfit having beaten Burren in this year's county final.

Meanwhile St Gall's hope to build on their record-equalling seventh Antrim SFC title when they face a Glenswilly side which boasts Donegal forward Michael Murphy in its ranks.

St Gall's beat Cargin by a single point in the decider and aim to repeat the provincial success they enjoyed in 2009, which led to a subsequent All-Ireland win over Kilmurray-Ibrackane in March 2010.

The winners of that tie will face Roslea Shamrocks or Ballinagh in the Ulster semi-finals.

Also on Sunday, Derry champions Ballinderry take on Monaghan counterparts Scotstown, with Ballinderry manager Martin McKinless set to include five Under-21 players in his line-up.

Ryan Bell, Aaron Devlin, Daniel McKinless, Darren Lawn and Gareth McKinless are all likely to come up against the Farney County team, who defeated Clontibret in their county final.

The likes of Kevin McGuckin, Conleith Gilligan, Michael Conlan, Enda Muldoon and James Conway are among the players who offer experience for the 2002 All-Ireland champions from Derry.