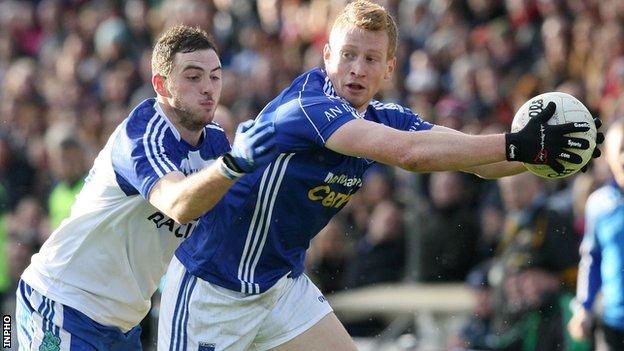 Conor McCarthy fired over two points to help underdogs Scotstown into a 0-5 to 0-4 lead at the break.

James Turley levelled before Bell won it a minute from time to set up a semi-final against Crossmaglen or Kilcoo.

Dermot McGuckin gave the Derry champions an early lead but McCarthy's double and a point from keeper Rory Beggan helped Scotstown into a 0-4 to 0-2 lead.

Darren Hughes was among the scorers as Scotstown surged clear early in the second half, and the hosts were on course for an upset.

Collie Devlin's point started the Ballinderry comeback and it was followed by two frees from Conleith Gilligan.

Conway registered the decisive score as he fisted in on 50 minutes to move Ballinderry two in front.

However, a resilient Scotstown hit back with Kieran Hughes making it a one-point game before Turley equalised.

Bell had a quiet game but his point was crucial and put Ballinderry back in front with just seconds remaining.

Scotstown were presented with a chance to take the match into extra-time, but Kieran Hughes kicked a free wide.

Enda Muldoon, a second-half Ballinderry substitute, was relieved to progress after a tough test.

"We're delighted to be in the semi-finals but we needed a bit of luck to get through," he said.

"After five minutes we knew this was going to be very difficult for us and sometimes they had two men diving at the feet of out forwards.

"Scotstown were in control during the second half but we got a few breaks and the goal was vital."