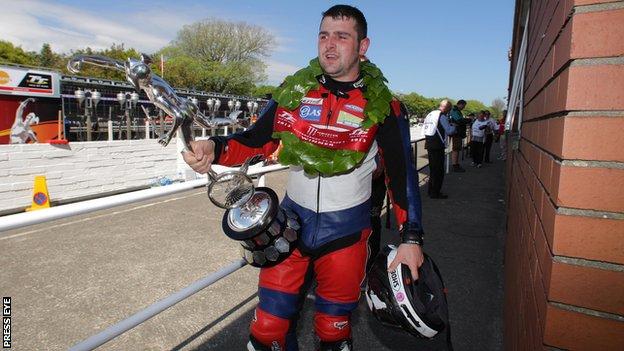 Michael Dunlop has split from the Honda racing team even though he won four Isle of Man TT races for the manufacturer this year.

Honda race boss Neil Tuxworth said that Dunlop had been unable to agree terms to ride for the team in 2014.

"We put two or three deals to Michael but he turned them all down," Tuxworth told Motorcycle News.

"Michael will not be with Honda next year. That is 100%. He decided that he didn't want to stay with Honda."

Tuxworth added:""You couldn't have had a much more successful season than we have had this year with Michael, winning four out of five TTs."

Dunlop, whose four-timer this year brought up his career haul of TT wins to seven, could not be reached for comment on the surprise development.

His performances at this year's TT marked out him as the world's current top road racer but at this stage, it's unclear what Dunlop's plans are for 2014.

The Ballymoney man won the opening Superbike race at this year's Isle of Man meeting before triumphing in both Supersport races and the Superstock class.

He was only prevented from a record-equalling fifth win of TT week when he was pipped by John McGuinness in the Senior race.

McGuinness was Dunlop's Honda team-mate this year but while the Morecambe man is understood to be keen to remain with the outfit, he has not yet agreed terms.