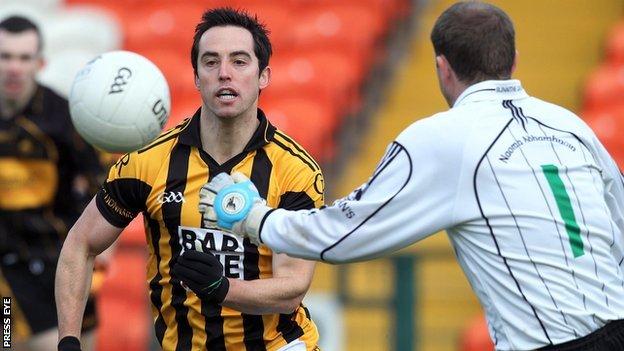 Armagh and Crossmaglen star Aaron Kernan has revealed he must take an extended break to avoid career-threatening Achilles damage.

The half-back, who missed Crossmaglen's drawn Ulster Club quarter-final against Kilcoo last Sunday, is expected to be out of action for at least four months.

Kernan hopes to be back in March but will miss Armagh's McKenna Cup campaign and the early stages of the League.

The player revealed he has had the Achilles problem for three years.

"I first picked up the injury in the build-up to a Championship game against Down," said the 29-year-old.

"It is a huge blow to miss the Club Championship, but I could not risk doing more damage which could have been career threatening.

"It is best for me long term, and also for my team-mates. Any player who is not fully fit will not do his team justice."

Kernan tore his Achilles following this year's Armagh county semi-final and was not able to train ahead of the final against Pearse Og.

He will wear a protective boot for the next month, before undergoing intensive rehab.

Kernan has been a part of the Armagh county panel for a decade and has won seven Ulster Championships with Crossmaglen.

The defender has been unable to take a break during that period with the club season overlapping the county campaign.