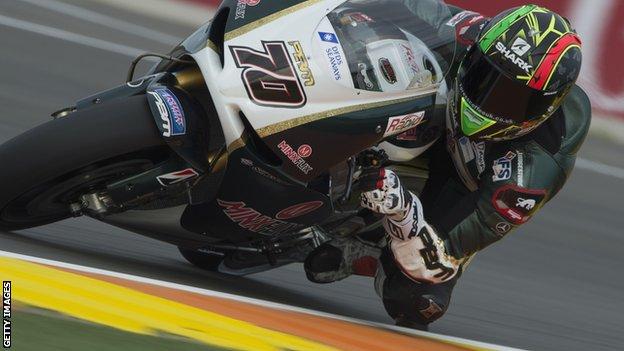 Northern Ireland man Michael Laverty finished 17th in the final MotoGP round of the season in Valencia as Marc Marquez clinched the championship.

Toomebridge man Laverty, who had started 21st on the grid, benefited from a number of retirements as he was able to improve his position.

Laverty's only points finish of the year remains his 13th at Jerez in May.

Marquez's third place was enough for him to win the title as his nearest rival Jorge Lorenzo took victory.

Lorenzo finished ahead of Dani Pedrosa but Marquez, 20, went into the race knowing that a top-four finish would be enough to secure the title.

Marquez, who becomes, the youngest ever MotoGP world champion, started from his ninth pole position of the season but played it safe by avoiding a thrilling tussle between defending champion Lorenzo and Pedrosa.

Laverty, 32, has said he expects to remain with the Paul Bird Motorsport team for the 2014 MotoGP season, although the future of the outfit at world level hangs in the balance as they see major backing from the Aprilia factory.