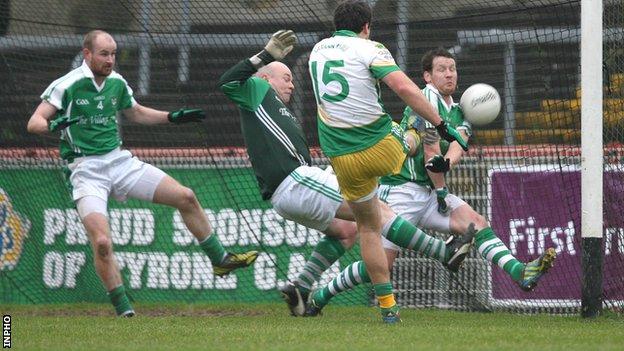 Two goals from Colin Kelly helped Glenswilly to a 3-9 to 2-8 win over Roslea in the Ulster Club semi-final.

Roslea failed to capitalise on their second-half dominance as Kelly netted again before Seamus Quigley converted a penalty for the Fermanagh champions.

Kelly gave Glenswilly the perfect start, with Roslea keeper Sean Boyle getting a touch to his shot but the ball trickled over the line.

The goal came just two minutes into the Healy Park clash and Glenswilly surged into a 2-4 to 0-2 lead when Murphy finished a flowing four-man move after 20 minutes.

Seamus Quigley then added his third and fourth points of the game and James McMahon slotted over to make it three straight points for Roslea.

Murphy registered the final point of the first half to leave Glenswilly with a six-point advantage.

Roslea took control on the restart and had already squandered three chances before points from Kevin Cosgrove and Peter Lynch.

Gary McFadden fired over for Glenswilly and Kelly completed his double on 42 minutes, flicking into the net from Murphy's free.

Seamus Quigley scored Roslea's first goal with a penalty after Niall Cosgrove, who had an earlier effort saved by Philip O'Donnell, was pulled down by Joe Gibbons.

O'Donnell was at fault for Mulligan's goal, the keeper deceived by a high ball which dropped over his head and into the net.

Roslea were just two points adrift but a three-point blast from Glenswilly, with Gibbons, Caolan Kelly and McFadden, sealed Glenswilly's place in the final against Ballinderry in a fortnight.