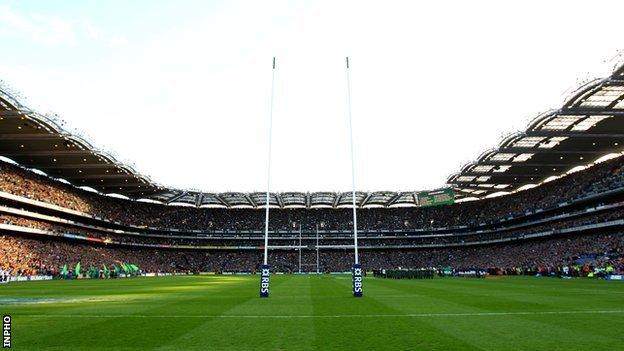 Ireland will consider launching a bid to host the 2023 Rugby World Cup this week, the country's sports minister Leo Varadkar confirmed on Monday.

The ambitious bid would see matches played on both sides of the Irish border, taking in both rugby union and gaelic games venues.

Ireland has been mulling over the idea for over a year, looking to replicate the successful 2011 New Zealand event.

Varadkar will seek approval from cabinet colleagues on Tuesday.

"It's probably the biggest event a country like Ireland could do, we're too small for the Olympics and the Fifa World Cup and for that reason it would engender enormous national pride," Varadkar told an International Rugby Board conference.

"The second thing is that even during the very difficult times of the Troubles, rugby in Ireland was a unifying sport.

"For us in Ireland, it would just be a symbol of how far we've come from the bad times to the better times now."

South Africa, hosts of the hugely symbolic 1995 rugby World Cup and 2010 soccer World Cup, have also indicated that they plan to make a bid.

France, hosts as recently as 2007, have also expressed an interest in the 2023 edition.

Dublin has been working with the Northern Ireland executive on the proposal and also has the backing of Ireland's Gaelic Athletic Association (GAA), meaning it can use stadiums like the 82,300-capacity Croke Park.

Alongside Croke Park, there are another 10 gaelic grounds as big or bigger than the second-largest rugby stadium in the country, Munster's Thomond Park, although many will need major renovation to stage an international tournament.

In addition to Croke Park and Belfast's Casement Park, the other GAA grounds which would be part of the IRFU's bid are Pairc Ui Chaoimh, the Limerick Gaelic Grounds, Fitzgerald Stadium in Killarney and Galway's Pearse Stadium.

The GAA had to ask its members earlier this year to allow the stadiums to be opened up to other sports which it had previously done eight years ago.

In 2005 the GAA changed its rules to permit rugby and soccer to be played at Croke Park while the old Lansdowne Road was being upgraded.

Varadkar said it could potentially boost the ailing economy by as much as 800 million euros ($1.1 billion) with hundreds of thousands of fans coming to the country.

The World Cup will be hosted by England in 2015 and then Japan in 2019, the first time the tournament will be staged outside either Europe or the southern hemisphere powerhouses of New Zealand, South Africa and Australia.

"We see this is as having great potential for Ireland as an island and for the sport itself," said Irish Rugby Football Union Chief Executive Philip Browne, who has been working on the bid since 2011 alongside the two governments.