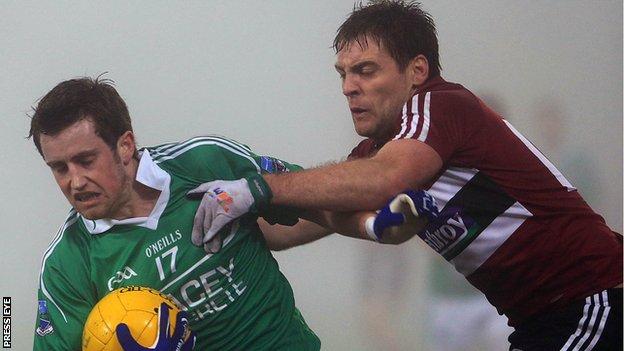 Pete McGrath's reign as Fermanagh manager got off to a losing start as the county side fell to a 3-8 to 1-10 defeat by St Mary's in the McKenna Cup.

Fermanagh made a strong start, scoring the first six points of the game played at a foggy Brewster Park.

But Belfast college St Mary's hit back and a goal by Conal McCann helped them establish a 1-5 to 0-6 half-time lead.

Tomas Canavan got a second goal for the students and they clinched victory when Ronan Sexton netted late on.

In between, Seamus Quigley netted a penalty for Fermanagh.

St Mary's deserved their win, having played some good football and new Fermanagh boss McGrath will have been given plenty to ponder.

McGrath, who led Down to All-Ireland titles in 1991 and 1994, was appointed to the Erne county hot seat in November, succeeding former Tyrone star Peter Canavan was resigned after three years in charge.

New man McGrath could have been forgiven for thinking he was going to enjoy a winning start as the county side led 0-6 to 0-0 after 19 minutes.

However, the men in green failed to score for the rest of the half and McCann got the first goal for St Mary's who quickly added points through Tomas Canavan (2), Aidan Forker, Brendan Hasson and Conor McMahon.

Canavan and Quigley swapped points early in the second half before Canavan scored the second goal for St Mary's to put the visiting students into a 2-6 to 0-7 advantage 14 minutes into the half.

Fermanagh, though, hit back, scoring a goal and three points in eight minutes.

The goal came from a Quigley penalty after the big Fermanagh front man himself had been brought down by St Mary's full-back Niall Donnelly who received the game's only black card as a result.

Fermanagh were a point in front after 25 minutes of the second half but that was to be their last score and St Mary's finished strongly to clinch the victory.

A point by Peter Carragher and a goal by substitute Sexton swung the game their way and then Richard O'Callaghan, playing on his home pitch, scored another point for the college side.