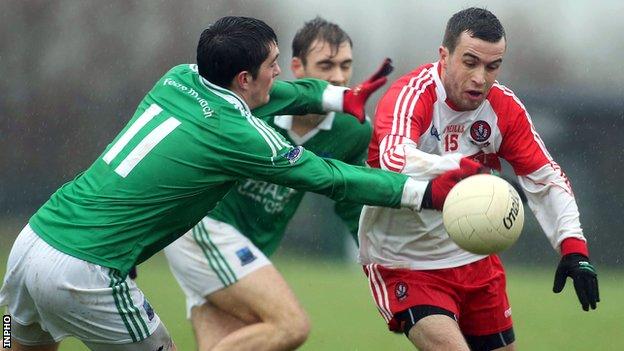 There were two home victories in McKenna Cup Section B as Monaghan and Derry both recorded wins.

Derry maintained their unbeaten run with a 1-11 to 2-4 win over Fermanagh at Owenbeg.

Aaron Kerrigan netted early for Derry while Seamus Quigley and his brother Sean were the Fermanagh goalscorers.

Monaghan were 1-16 to 0-8 winners over St Mary's at Clones, with Jack McCarron scoring the only goal midway through the second half.

The Farney men led by 0-9 to 0-3 at half-time with Thomas Kerr and Jack McCarron among their scorers.

McCarron, Shane Smyth, Kieran Duffy and Paul Finlay helped Monaghan take a 0-13 to 0-4 lead inside 14 minutes of the restart.

McCarron netted soon after, and despite the best efforts of the students, Monaghan held out for a deserved victory.

Goals arrived early at Owenbeg, with Kerrigan finding the back of the net for the hosts after just three minutes.

Fermanagh, with the wind advantage, led Derry 1-1 to 1-0 after eight minutes following Seamus Quigley's goal, with Sean Quigley adding another Erne three-pointer in the 24th minute.

Fermanagh were 2-3 to 1-4 ahead at half-time, but only scored a point on the restart as Derry upped their game.

James Kielt and Ciaran McGoldrick were among the Oak Leaf scorers in the second half as they took a four-point win.