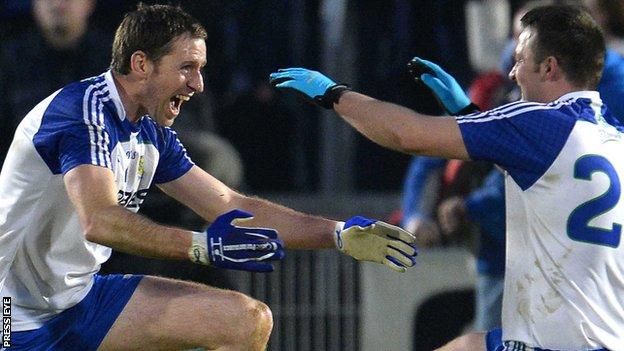 Ulster club champions Loughgiel and Ballinderry will contest their All-Ireland semi-finals at Pairc Esler in Newry next month.

Antrim hurlers Loughgiel will take on Mt Leinster Rangers from Carlow at 15:00 BST on Saturday, 8 February.

The other football semi-final between Castlebar Mitchels and Dr Crokes will also be played on 15 February, with O'Moore Park the venue at 15:00.

Semple Stadium in Thurles will host the second hurling semi-final on 8 February, with Portumna meeting Na Pairsaigh at 17:00.

Loughiel manager PJ O'Mullan said he was "pleasantly surprised" that the semi-final will be staged at an Ulster venue.

"Most people thought the game was going to be at Parnell Park in Dublin," he added.

"So this is a welcome boost, helping northern fans wanting to travel to the match.

"Ulster hurling needed a boost and the GAA has taken the correct step."