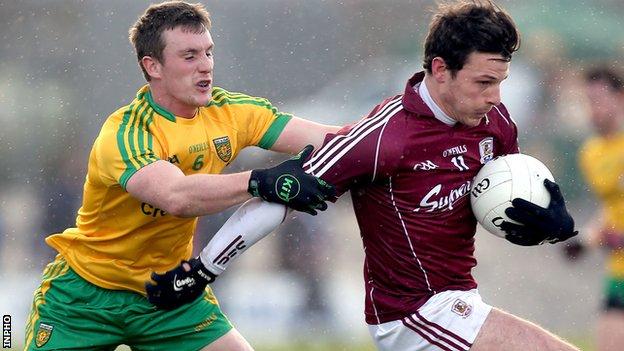 Donegal are the only team with maximum points in Division Two as they continued their impressive start with a seven-point victory away to Galway.

Colm McFadden scored the only goal of the game and matched fellow forward Michael Murphy's tally of four points.

Donegal's Patrick McBrearty came on as a substitute and scored three points.

Eoin Concannon revived Galway with three points from out on the right, but Donegal's lead was never really threatened.

The arrival of McBrearty only strengthened Donegal up front and, even at this early stage, Jim McGuinness's men look on course for an immediate return to Division One.

After their two opening away wins, Donegal will face Ulster rivals Monaghan in their first home match when their campaign resumes on 2 March.