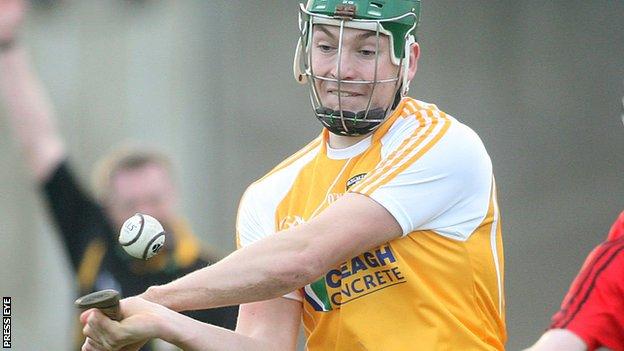 Leinster powered to an 8-18 to 1-21 win over Ulster in Sunday's Interprovincial Hurling semi-final at Trim.

Offaly's Joe Bergin and Dublin's Paul Ryan quickly ensured all of the full-forward line had found the back of the Ulster net inside eight minutes.

Antrim's Paul Shiels got the Ulster goal late on but there were no stopping Leinster who now meet Connacht.

Three from reigning Christy Ring champions Down - Conor Woods, Stephen Keith and Sean Ennis - all lined out in defence. Derry's Kevin Hinphey was at midfield and Armagh's Ryan Gaffney at corner-forward.

After Leinster's strong start, scores by Shiels and his Saffrons colleague McKenna kept the northern side in touch.

However, further goals from Kilkenny duo Colin Fennelly and Eoin Larkin saw Leinster go 5-11 to 0-6 ahead by half-time.

Antrim's Ciaran Clarke claimed the first score of the second half inside a minute of the restart, and although goals followed from Ryan O'Dwyer and substitute Jack Guiney to push Leinster 7-14 to 0-10 ahead at the third quarter, Ulster upped their game.

Greg O'Kane's side scored eight of the next nine points, with McManus, Clarke, Shiels and substitutes Alan Grant of Derry and Antrim's Daniel McKernan accounting for their scores to cut the deficit to 18 points.

Ulster finished strongly, outscoring Leinster by 1-3 to 0-2 in the closing four minutes, including a Shiels goal and points from Shiels and captain Conor Woods but it was far too late.