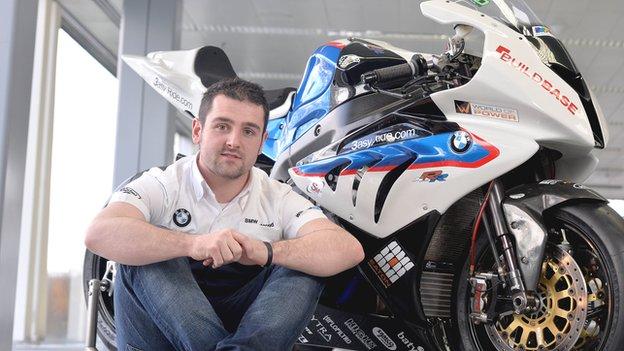 Michael Dunlop has agreed a deal to ride a factory-backed BMW Superbike at this year's international road races.

The Ballymoney rider will also campaign a BMW Superstock bike with support from his own MD Racing Team sponsors.

Dunlop had indicated at the end of last year that he was considering taking a year out from the sport but says this deal offers him the package he wants.

As well as competing at the North West 200, Isle of Man TT and Ulster Grand Prix, he may race some short circuits.

The road race star failed to a agree a fresh arrangement with Honda for 2014, despite taking four TT wins in the Japanese manufacturer's colours last year.

Those victories brought the Northern Ireland rider's overall tally of wins to seven on the Mountain Course.

He also has two North West 200 successes and six Ulster Grand Prix victories on his CV.

The deal has the support of BMW Motorrad in Germany and BMW UK and will also involve the participation of the Buildbase Racing team.

"BMW approached me in the last couple of weeks and they have given me the tools which I believe can do the job," said the 24-year-old.

"The bike will be fantastic - it will be built for me and I'll be the only rider in the team, so I'm really excited about it.

"I've got the full support of the factory and anything I want will be available to me.

"We'll do the international events and then see after that, but I'd like to do a couple of other events to see if I can race short circuits.

"There's a lot of work ahead and we'll need to put in a lot of testing but I have full faith that we can win international road races. I know we potentially have a winning package.

"My love for the sport and my hunger and desire are still there."

The 2014 TT is a special event for BMW as it commemorates their first TT win which took place 75 years ago in 1939, by German racer George Meier.