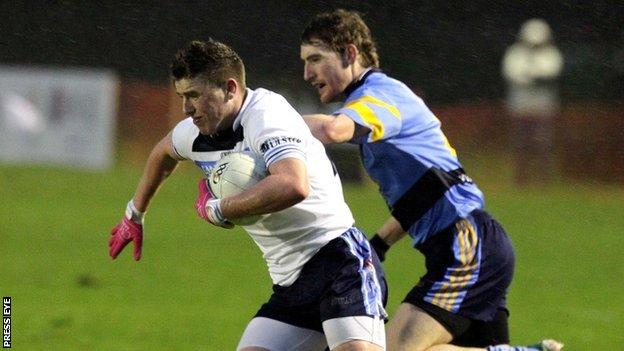 UUJ are through to the Sigerson Cup final to meet UCC after a 1-12 to 0-7 win over UCD in their semi-final at Queen's Playing Fields on Friday.

Saturday's match will be a repeat of the 2011 decider as the Cork side defeated NUI Maynooth by 1-14 to 0-12 in the other semi-final.

Jordanstown led 1-10 to 0-2 at half-time, with the help of a strong wind and driving rain at their backs.

Armagh's Jamie Clarke scored the only goal of the game after four minutes.

Monaghan player Kieran Hughes top-scored with 0-5 over the hour's play while Tyrone's Ronan O'Neill, Conor McAlliskey and Mattie Donnelly hit 0-5 between them.

Clarke received a black card on 59 minutes for a deliberate trip, but the game was long over as a contest.

The GAA trialled a new clock and hooter system in Friday's semi-final double-bill at the Dub.

Fermanagh referee Martin Higgins did not recognise the sound of the hooter at the end of Jordanstown's game and played 21 seconds over the allotted time at the end of the game.

Both sides only scored two points against a very difficult wind in the second-half, although conditions did ease somewhat.

UUJ led by 1-7 before UCD got their first score after 21 minutes, through a free from Dublin All-Ireland winner Paul Mannion.

Westmeath midfielder John Heslin went on to hit 0-4 for UCD, three from frees, but the damage had been done early in the game by Adrian McGuckin's UUJ side.

Paul Geaney's early goal helped the Cork side lead 1-6 to 0-6 at half-time in the day's first last four clash.

After UCC's Alan Cronin was sent off, a Paddy McBrearty point helped Maynooth level but after the further dismissal of Michael Quinlivan, the Cork side regained control in the closing stages.

Cronin received a straight red card but Tipperary player Quinlivan received his marching orders after his initial yellow card was then followed by a black card.

Donegal's 2012 All-Ireland winner Paddy McBrearty was part of the Maynooth team, alongside Footballer of the Year, Michael Darragh MacAuley from Dublin.

The final takes place on Saturday at 18:45 GMT.