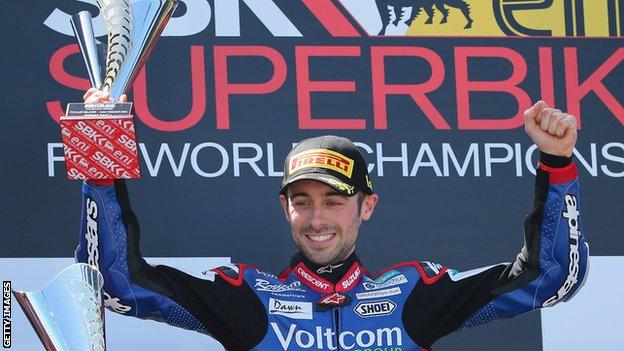 Northern Irish rider Eugene Laverty gave Suzuki its first World Superbike victory since 2010 as he earned a magnificent win in the opening race of this year's series in Australia.

Toomebridge man Laverty, in his first outing for the Crescent Suzuki team, overcame a slow start to finish nearly three seconds ahead of Marco Melandri.

Laverty was in second place on lap 15 in race two when his engine blew.

Ballyclare man Jonathan Rea was sixth in race one and fifth in race two.

Laverty's engine failure in the second race led to the premature halting of the race two with leader Sylvain Guintoli taking the victory ahead of Kawasaki team-mates Loriz Baz and Tom Sykes, who won last year's championship.

Despite his race two disappointment, Laverty's opening round performances at Phillip Island should give him huge confidence for the new season.

His victory in race one over Aprilia rider Melandri will have given him particular satisfaction after his departure from the Italian team at the end of last season to accommodate the arrival of the Italian.

Laverty's win meant that he was the first Suzuki rider to triumph in a World Superbike race since the second race at Kyalami in 2010.

After a poor start in the opening race, which saw him crossing the line in seventh place at the end of lap one, Laverty started his charge to the leaders thanks to an remarkable pace.

The Northern Irishman then passed Davide Giugliano, Melandri and Guintoli to move into the lead on lap 17.

With Laverty pulling away in the late stages, Melandri got the better of team-mate Guintoli for second whilst Giugliano took fourth.

Baz edged out Pata Honda rider Rea to take fifth place as reigning champion Sykes had to settle for seventh ahead of Chaz Davies.

Despite his race-two retirement, Laverty spoke of his delight at his Suzuki debut win.

"Thank you so much to everyone at Crescent Racing for making is happen," added Laverty.

"It's a bitter sweet day after our engine blow-up in race two but even that can't wipe the smile from my face."

Guintoli's win and third place over the opening weekend means that he leads Baz by 10 points in the championship standings with Laverty in fifth spot, 16 points off the pace.