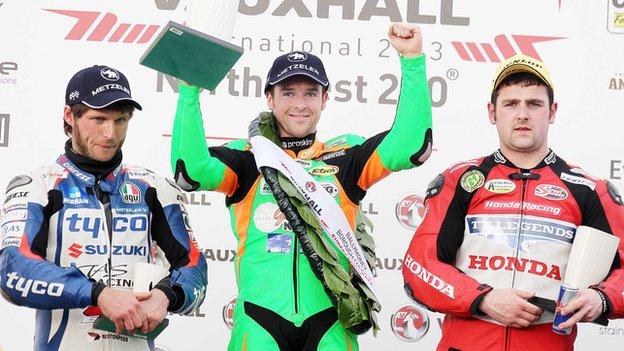 BBC Northern Ireland has announced the extension of its deal to broadcast the North West 200 across radio, television and online for a further five years.

All practice sessions and races will be broadcast on Radio Ulster with live video coverage on the BBC Sport NI website.

There will also be three television highlights programmes around the Thursday night and Saturday races.

This year there will be three races on the Thursday evening (15 May) and five on Saturday (17 May).

The two Superbikes races on the Saturday have been extended from six to seven laps.

An award for the 'man of the meeting' is being introduced for the first time with the trophy named in honour of the late Robert Dunlop, the event's most successful rider with 15 NW200 victories.

Also, in an attempt to eradicate any disadvantage suffered by riders who fall foul of wet and dry practice sessions, a new alternate grid positioning system will be introduced for 2014.

"We currently allocate grid positions based upon practice timings over Tuesday and Thursday's practice sessions but if one session is wet and the other dry and a rider hits trouble in the dry he will lose out." explained Race Director Mervyn Whyte.

"If the weather changes this year from one session to the other we will alternate the grid positions along the lines of the BSB system using times from both practices. It will be a fairer system for everyone."

"We believe we have taken coverage of the North West 200 to a different level, and we will continue to look at ways to further improve what we do and how we bring our audiences the best possible coverage of this magnificent event."

Race Director, Whyte, said: "The partnership the North West 200 has with the BBC Sport team is excellent and has seen the coverage of the event just get better year on year.

"I would like to thank the BBC for this endorsement of our event and I look forward to this coming year and many more to follow."

"It is a great bit of kit and I feel comfortable on it. I just need to get enough practice and I will be ready to go."