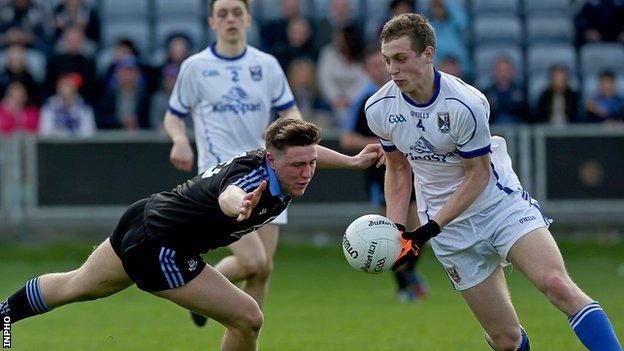 Cormac Costello's late free gave Dublin a 0-11 to 0-10 win over Cavan in a controversial All-Ireland U21 semi-final in Portlaoise on Saturday.

Cavan moved four points clear in the first half although Dublin fought back to trail 0-7 to 0-5 at the break.

The Ulster champions regained their four-point lead but Dublin levelled.

Cavan protested at referee Derek O'Mahoney's award of the match-winning free and he required a police escort from the field at the final whistle.

Breffni forward Joe Dillon slotted over three points in the first half at O'Moore Park as Cavan proved more clinical in attack.

Enda Flanagan's free made it 0-9 to 0-5 in the second half but the Dubs launched a comeback with Conor McHugh equalising before Costello's winner.

Cavan secured their fourth straight provincial U21 title with a 2-6 to 0-8 win over Armagh in the decider earlier this month.