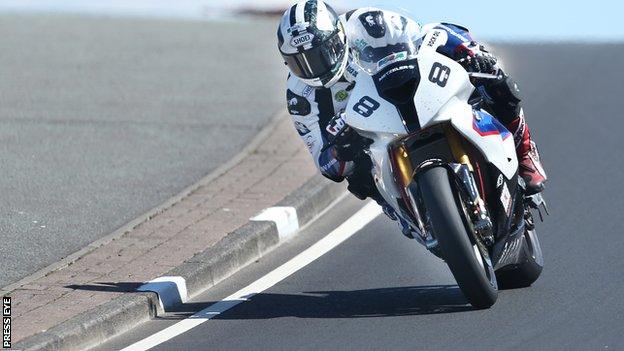 Michael Dunlop will start on pole for the Superbike and Superstock races at the North West 200 after setting a blistering pace in Thursday's practice.

The Ballymoney rider was quickest in the Superbikes at 122.27mph ahead of Michael Rutter and Alastair Seeley.

Dunlop edged out Seeley in the Superstocks with Rutter in third.

Seeley topped the Supersport times from Rutter and Lee Johnston, who was fastest in the Supertwins with Keith Amor second and Ivan Lintin third.

Michael Dunlop, a two-times winner at the North West, powered to Superbikes pole on his BMW machine with Rutter well back on 121.83.

The race action starts on Thursday evening with the opening Supersport, Superstwin and Superstock events.

Carrickfergus man Seeley will be aiming for his 11th victory at the NW 200 when he goes from pole in the Supersports.

Seeley's tally is three short of Englishman Rutter, who came in just ahead of Fermanagh rider Johnston.

There was a delay in practice when Maria Costello. the only female rider at the meeting, crashed at a chicane but the Northampton woman walked away unscathed.

Johnston heads the Supertwins field with comeback man Ryan Farquhar having to start from seventh on the grid.

Michael Dunlop was just 0.06 faster than Seeley in the Superstocks and that should be a cracking race to finish the competitive action on Thursday night.