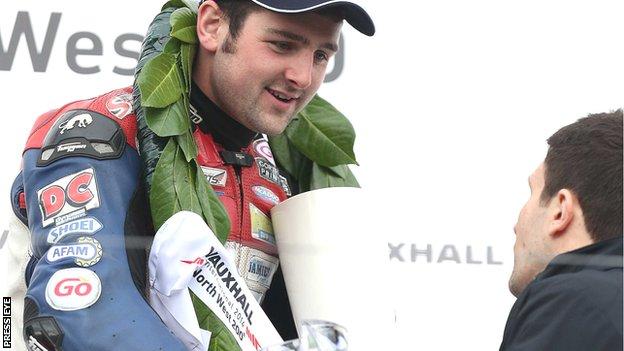 Michael Dunlop won the feature Superbike race to complete a double in a thrilling North West 200 on Saturday.

The Ballymoney rider was runner-up in two races before a Superstock success was followed by the Superbike win.

"I'm ecstatic - I just pushed it on the last lap and it's what I needed," said Dunlop after his Superbike victory.

He was pipped by his brother William in the opening Superbike race while Bruce Anstey won the Supersport event and Lee Johnston clinched a Supertwins double.

Rain showers left the track wet for the early races and tyre choice was a crucial factor for the riders.

The drama started in the first race as Johnston and Seeley, a double winner on Thursday night, battled it out in the Supersport class.

The Northern Ireland pair touched and slid off at Metropole on the final lap, allowing Anstey to ease through for his 10th win at the NW 200 with Conor Cummins second and Gary Johnson third.

It was a case of sibling rivalry in the opening Superbike race, as the duel between the Dunlop brothers ended with William edging out Michael on the final lap with the pair well clear of Cummins in third.

"Superbikes are not really my thing, it is usually Michael, so I am delighted to win this," said William Dunlop.

The final two races belonged to Michael Dunlop - he moved ahead of Michael Rutter before the race was stopped after three laps following a crash in which Englishman Simon Andrews was seriously injured.

It was later declared a race result so the 25-year-old secured his third North West win with Rutter second and Johnson third.

Josh Brookes led the feature Superbike race but an error at Mathers chicane allowed Michael Dunlop to power clear on his BMW machine to secure a comfortable victory from the Australian and Seeley.

"I knew I could do it and it's fantastic - the bike is class, I love it and I can't wait for the Isle of Man TT," added Dunlop.

Michael Dunlop's man-of-the-meeting display meant he also became the first winner of a new trophy named in honour of his father Robert, who won a record 15 times at the North West 200.