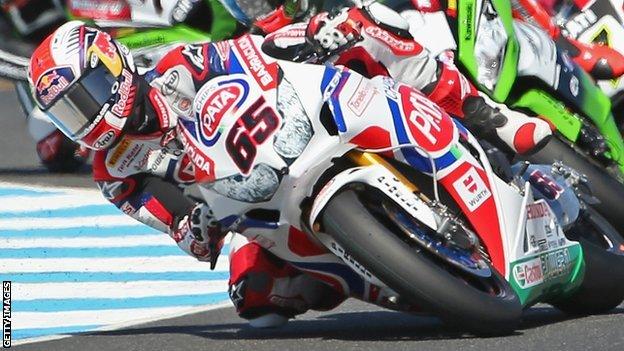 Jonathan Rea relinquished his lead at the top of the World Superbike championship standings after twice finishing sixth at Donington Park.

Rea had gone into the round as leader after a double success at Imola.

Eugene Laverty crashed out in race one and fell off before half-distance in race two, re-mounting to take 13th.

That result saw the Crescent Suzuki rider from Toomebridge salvage three points from a disappointing weekend and he lies 10th in the championship on 65 points.

Laverty had made his way up to sixth place from 10th on the grid when he came to grief in the opener.

Rea was eighth fastest in qualifying but blamed "engine braking issues" for his mediocre performances on Sunday.

"It's baffling how we can go so well at Imola, yet struggle here," said the Pata Honda rider from Ballyclare.

Baz was runner-up in both events, with Alex Lowes third in race one and Sylvain Guintoli completing the podium in race two.

The next round will be held in Sepang, Malaysia, on Sunday 8 June.