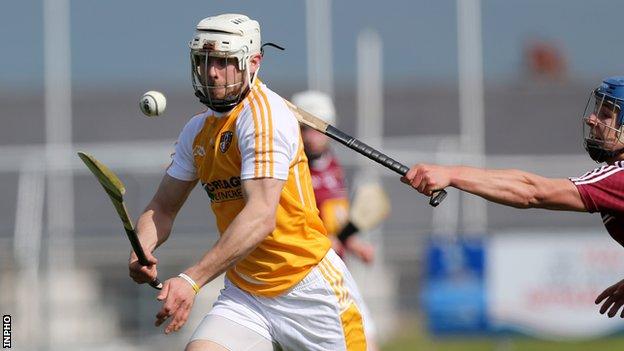 Neil McManus has described Antrim's Leinster SHC quarter-final with Wexford as the biggest match the county's hurlers have faced in two decades.

Antrim qualified for Sunday's last eight tie in Portlaoise by winning all four games in the round-robin series.

They have never beaten Wexford in the championship, losing to them by ten points in last year's qualifiers.

"We have been hurling well for the last two months, hopefully the buzz will counteract our lack of rest," he said.

Tomorrow's game will be Antrim's fifth game in six weeks after coming through an exhausting round-robin series.

The saffrons beat Westmeath, Carlow, London and Laois in the championship preliminaries, and previously defeated Offaly in a Division 1B relegation play-off, meaning they have had enjoyed five victories in a row.

There is a feeling within Antrim that the GAA authorities have treated them unfairly by not giving them a rest period in between the round-robin series and the knockout stages.

"To afford teams coming out of the round robin series a week to prepare for a quarter-final is not very nice," said McManus.

"They could have given us another week at least because five games in six weeks is tough on the body.

"Wexford have had nine weeks to prepare for this match and it will be very tough for ourselves to win with the small preparation we've had.

"They are a massive step up from the teams we played in the round robin, but there is a real buzz in our camp and it's not beyond the realms of possibility that we can win this game and get to Croke Park for a Leinster semi-final.

"It's as big a championship match as Antrim have had in the last two decades and we are hugely up for the challenge."

The Wexford team includes just seven survivors from the side which took Clare to extra-time in last year's All-Ireland qualifiers.