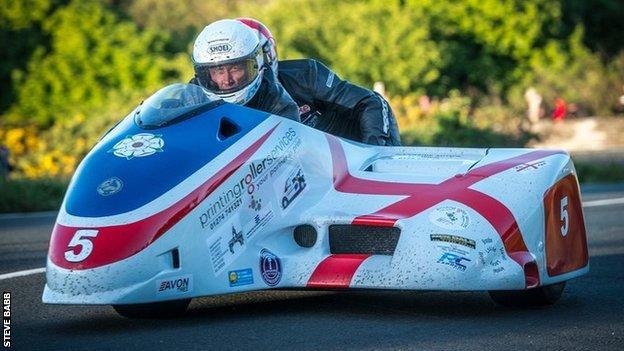 I've dreamt of winning a TT race for years. This makes all the years of hard work worthwhile

"I've dreamt of winning a TT race for years," he said.

"This makes all the years of hard work worthwhile."

Brothers Ben and Tom Birchall were the early leaders but the Mansfield pair crashed out at the Black Dub on lap two, sustaining minor injuries.

Manxman Dave Molyneux, partnered by Patrick Farrance, then assumed the lead, but they retired between Greeba Bridge and Gorse Lea on the final lap while enjoying a healthy advantage.

At the end of lap one, the Birchalls led by four seconds from Molyneux and Farrance, with Holden and Winkle a further two seconds behind.

Molyneux took control with the fastest lap of the race on his second circuit, but mechanical problems prevented him from adding to his tally of victories.

Ian Bell, from Bedlington, finished fourth on his return to the TT following a lengthy absence, with son Carl in the chair.

The second sidecar race will be held on Wednesday at 14:40 BST.