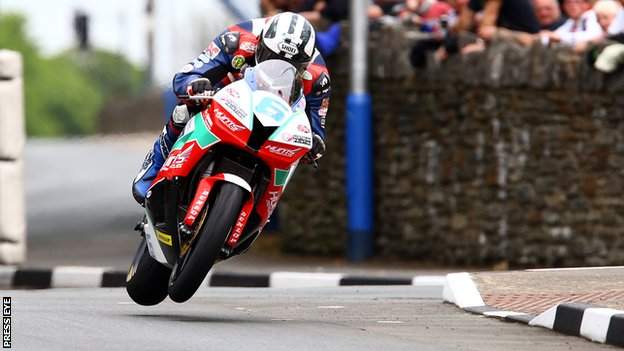 Michael Dunlop completed a hat-trick of Isle of Man TT wins this week with a dominant display in the second Supersport race at the meeting.

The Ballymoney man, 25, led from start to finish on his Honda and finished 10 seconds ahead of Bruce Anstey.

William Dunlop completed the rostrum, a further 13.5 seconds in arrears of the New Zealander.

Dunlop, who now boasts 10 career TT wins, set the fastest lap of the race at 127.40mph on his second circuit.

Following on from his Superbike and Superstock wins earlier this week, Dunlop has the opportunity to equal or even better his tally of four victories last year when he competes in the Lightweight Supertwins and Senior races on Friday.

One victory would see Michael draw level with Phillip McCallen and Steve Hislop on the all-time winners' list.

Dunlop, whose late father Robert earned five TT victories, led by 4.5 seconds from Anstey after lap one and doubled that advantage by the end of the second lap.

After catching his main rival on the road, he maintained a steady advantage to secure his fifth Supersport class TT win of his career.

"The bike was much better today than it was on Monday and that's all thanks to the team I have around me," said an ecstatic Dunlop.

"I could have gone harder if I needed to but I knew Bruce was second so I just sat with him and brought her home.

"There was some mist starting to come down heavy on the mountain but it's another win under my belt and it's fantastic."

The Antrim man comes from a family steeped in motorcycling with his uncle Joey having earned a record 26 Isle of Man TT victories.

Dunlop's father Robert died after a crash at the 2008 North West 200 in Northern Ireland - eight years after Joey's death at a race in Estonia.

Ian Hutchinson and Conor Cummins retired on the opening lap while Josh Brookes and Lee Johnston emerged unscathed after an incident at Creg-ny-Baa on the final lap.

Brookes and Johnston were contending for top six positions at the time.