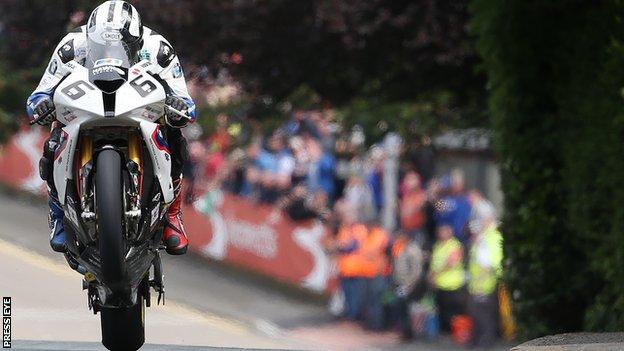 Michael Dunlop became the first rider to win four TTs in consecutive years when he secured his first success in the blue riband Senior event.

His older brother, William Dunlop, suffered a broken leg when he came off on the third of the six laps.

"William has two clean breaks on his left leg but he will be back fighting fit in the coming months," said his team Tyco Suzuki.

Michael Dunlop led by just 0.8 seconds from Martin after the opening lap, but extended his advantage to 7.5 seconds after lap two thanks to the fastest lap of the race, 131.67mph.

The riders were separated by the same margin as they flashed past the Grandstand for the final lap, but Dunlop added to his lead before taking the chequered flag.

Earlier in the week, Michael Dunlop, from Ballymoney in County Antrim, won the Superbike, Superstock and second Supersport races.

"Saturday's Superbike win was for BMW but this victory was a personal goal for me," said Michael after his latest success.

"I knew I would lose time to the Hondas in the pits but I just went as fast as I had to. I watched my boards and could have gone quicker if needed."

Bruce Anstey finished fourth in the Senior on his Padgett's Honda, followed by James Hillier on a Kawasaki, John McGuinness and Yamaha rider Josh Brookes, who achieved his best TT result to date.

Dan Kneen from the Isle of Man was eighth, ahead of Midlands veteran Michael Rutter.

Peter Hickman set the fastest ever lap by a newcomer with a speed of 129.104mph on lap six as he ended 11th.

Among the retirements was Lightweight TT newcomer Dean Harrison, who parked up at Sulby on lap three while challenging for a top-six position.