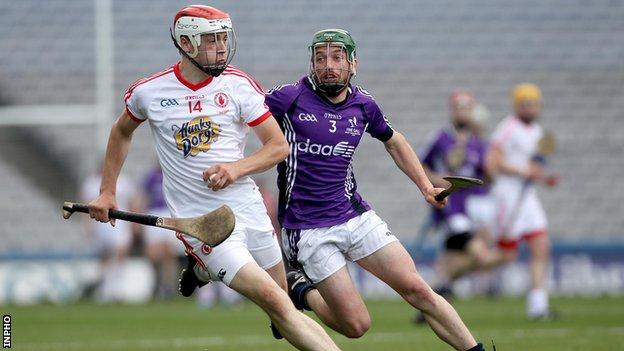 Tyrone secured a first Nicky Rackard Cup title after a thrilling one-point victory over Fingal in the final in Croke Park on Saturday.

Christopher Cross scrambled home a Tyrone goal after 24 minutes as the Red Hands led by 1-8 to 0-10 at half time.

Fingal cut the deficit to a point, but Tyrone held on for a famous victory.

The county now face an Ulster derby against Down to determine who plays in the Christy Ring Cup next year.

Tyrone eased into an early lead with scores from Casey, Gerard Gilmore and Tiernan Morgan.

Morgan then sent in a sideline cut which goalkeeper Hilary Murray Hession failed to hold, and Christopher Cross nipped in to finish to the net.

JM Sheridan hit several points for Fingal but wind-assisted Tyrone were able to pick off points, with Casey and Gilmore hitting the target.

When Casey steered over his eighth score of the contest, Mattie Lennon's men led by eight points, but they had to withstand a furious Fingal fight-back.

Substitutes Colm Foley and Danny Butterley both found the target, and Sheridan added to his tally

In stoppage time, they narrowed the gap to a single point when Smyth exploited a defensive error to pull back a goal, but Tyrone held on.

Meanwhile, Fermanagh's first appearance in the Lory Meagher Cup final ended in a two-point defeat by Longford in Croke Park.

Declan McGarry scored a hat-trick for the Erne county with Sean Corrigan hitting ten points in the 3-18 to 3-16 reversal on Saturday.

Fermanagh led by four points at half time, holding a 2-8 to 0-10 advantage.

Erne defender Daniel Teague received a straight red card after 50 minutes with Joe O'Brien grabbing two goals for Longford in the second half.

Eoin Donnellan was the top scorer, finishing the game with a haul of 1-9 for Longford.