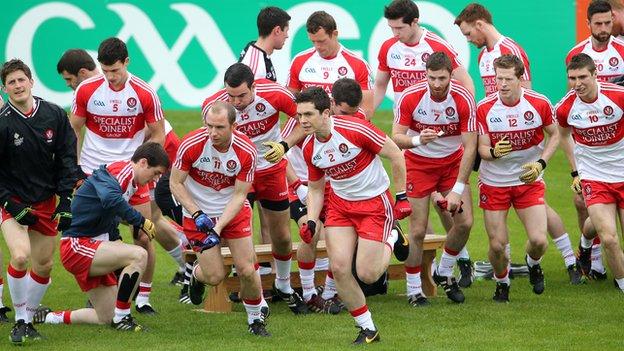 The venues and times have been set for the first batch of qualifiers in the All-Ireland Football Championship which are being played on Saturday, 21 June.

Derry, beaten by Donegal in the Ulster Championship, face Longford at Celtic Park at 17:00 BST.

Fermanagh, who lost to Antrim in the provincial competition, visit Laois and the throw-in at O'Moore Park is 15:30.

The rest of the first round will be played on 28 June.

Down will host Leitrim, Monaghan or Tyrone face Louth, Cavan are home to Westmeath and Carlow or Meath play Clare or Waterford.

Derry and Down will both be content with the draw, particularly securing home advantage along with Cavan.

Fermanagh have been handed the toughest draw, a visit to play a Laois team which gave All-Ireland champions Dublin a scare on Sunday before losing at Croke Park.