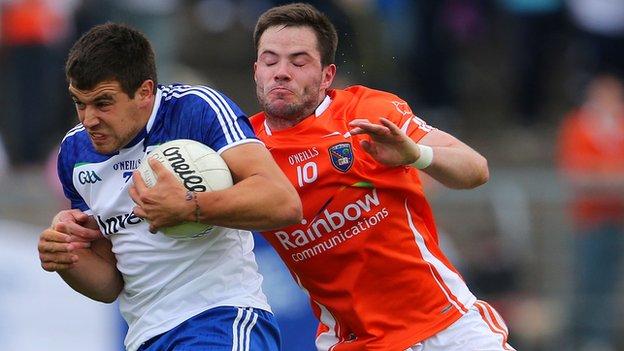 Armagh scored three late points to snatch a replay in the Ulster Championship semi-final against Monaghan at Clones.

Young substitute Rory Grugan scored a hotly-disputed free with virtually the last kick of the game to leave the sides on 14 points each.

Champions Monaghan looked to have won the game by going into a 0-14 to 0-11 lead with just a few minutes left.

The teams will meet again at St Tiernach's Park on Sunday, 6 July.

It was Armagh who were celebrating at the end as Monaghan felt they should have closed the game out and were unhappy about referee Joe McQuillan's decision to award the vital free for a shirt tug on Aaron Kernan.

Monghan had led 6-3 early on but Armagh came back to be on level terms at six points each at half-time.

Early in the second half Monaghan had their skipper and star forward Conor McManus black-carded for a late challenge on Finnian Moriarity. He was replaced by Chris McGuinnes.

Armagh led briefly at the start of the second half but there was never much in it and the sides were locked on 11 points each with 10 minutes to go.

However, points from Kieran Hughes, man of the match and goalkeeper Rory Beggan and McGuinness saw Monaghan forge a three-point advantage.

It was not enough, though, as Jamie Clarke and Stefan Campbell reduced the deficit and the cool-headed Grugan stroked over the last-gasp free.