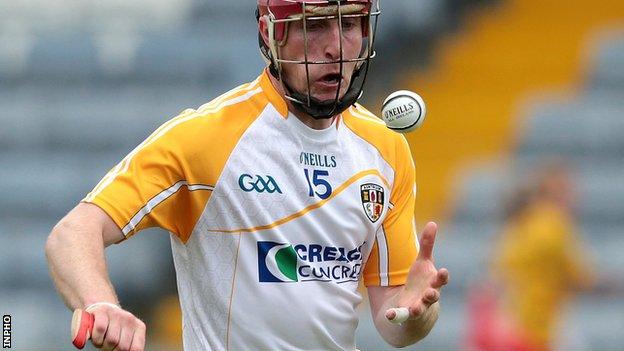 Daniel McKernan's late point clinched a 13th Ulster SHC title in a row for Antrim as they pipped Derry 2-17 to 2-16 in Sunday's decider at Owenbeg.

PJ O'Connell netted for the Saffrons after 22 seconds before the impressive Ruairi Convery levelled with a goal.

Derry's Tiarnan McCloskey was sent-off although the Oak Leafers led 1-9 to 1-8 at the break.

The Saffrons began this game in explosive fashion, as right from the throw-in they worked the ball upfield for O'Connell to pounce for the opening goal.

Derry kept in touch thanks to the brilliance of Convery from placed balls, with Sean McGuigan also taking an excellent score from play in the 13th minute.

The sides were level for the first time after 24 minutes, as Convery brought his tally to 1-4 with a superbly taken goal.

The Saffrons moved two points ahead thanks to a brace of Paul Shiels scores before disaster struck for Derry, after McCloskey was shown a straight red card, having pulled the face guard off an Antrim player.

Despite this, Derry gained momentum before the break with three unanswered points including scores from Convery and Kelly to take an interval lead.

McCann cracked home a goal as Antrim moved ahead before Derry registered 1-2 without reply, including a 66th minute McCloskey goal.

Four points ahead, but with a man down, pressure was on Derry to continue their impressive display.

Antrim worked hard, and bagged four unanswered points, including a Daniel McCloskey score to level the game at 2-14 each with six minutes left on the clock.

Convery regained the lead for Derry, but two quick-fire Antrim points edged the visitors back in front.

Convery continued to work hard, and was almost unerring from placed balls, but his late equaliser was cancelled out by McKernan's superb late point.

It was a double success for Antrim, as they delivered a strong second-half performance to claim their 55th Ulster Minor Hurling title, with a 0-17 to 0-9 win over Derry in the curtain-raiser at Owenbeg.

The sides were level on two occasions in the opening half, including at 0-6 apiece at the interval, but Antrim kicked on in the second half.

A Christy McNaughton score pushed Antrim back in front early on the restart to hand the Saffrons a lead they wouldn't relinquish.