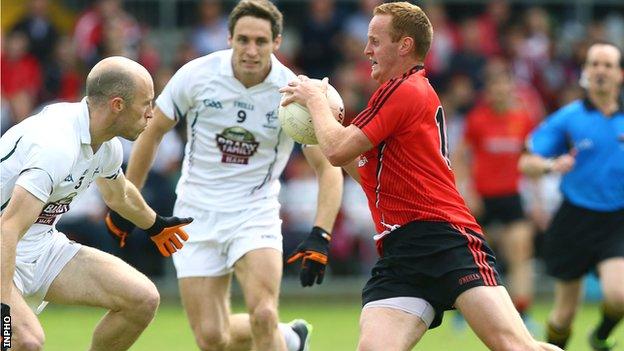 Down have suffered an All-Ireland exit after losing 1-18 to 0-11 to Kildare in Sunday's second-round qualifier.

The Leinster visitors dominated the first half at Pairc Esler and held a 0-8 to 0-3 advantage at the break.

Down made a superb start to the second half with Benny Coulter firing over two of five straight points for the Mourne side as they levelled.

The Lilywhites slotted over the opening two points but Donal O'Hare's double, both from frees, made it all-square.

Padraig Fogarty, Eamonn Callaghan and Padraig O'Neill tagged on Kildare points before Callaghan was black-carded for a poor challenge.

Kildare moved five ahead with points from O'Neill and Alan Smith, the replacement for Callaghan.

Coulter scored Down's first point from play in injury-time although there was still time for Eoghan O'Flaherty to restore Kildare's five-point advantage.

However, Down were level just seven minutes into the second half with O'Hare, Kevin McKernan and Darren O'Hagan adding to Coulter's two points.

The hosts failed to build on their comeback as Smith and Moolick made it 0-10 to 0-8 to Kildare.

It was level once again thanks to Declan Rooney and Conor Maginn scores but the Lilywhites responded with points from Fogarty and Emmet Bolton.

Conor Laverty reduced the gap to one before a controversial point from Fogarty, with the score allowed despite the ball appearing to go wide.

Moolick blasted into the roof of the Down net in the dying seconds as Kildare finished with a flourish.

After the game, a disappointed Down manager James McCartan said that it was not the time to discuss his future in the Mourne job.