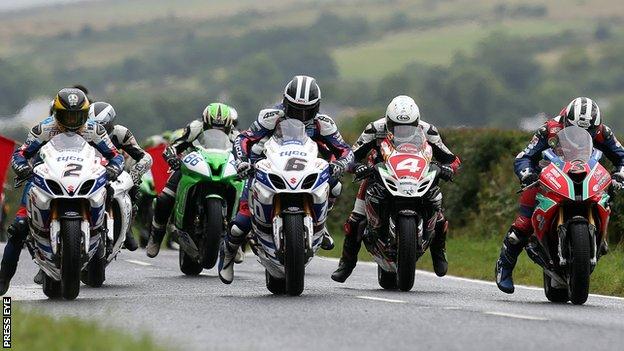 Michael Dunlop won the feature Race of Legends event at the Armoy road races while Guy Martin was a double winner.

Martin finished ahead of William Dunlop and Keith Amor in the Supersport race to secure his first-ever Armoy victory.

The Tyco TAS Suzuki rider then edged out Michael Dunlop by 0.8 seconds to seal a start-to-finish success in the Open class, with William third.

Michael, 25, took the flag in the final race of the day, finishing three seconds ahead of runner-up Martin.

Riding his Superstock BMW machine, Ballymoney man Dunlop was retaining the 'Race of Legends' title he won at the same meeting last year.

Manxman Dan Kneen occupied the final rostrum place, with William having to settle for fourth.

William Dunlop had started the meeting in impressive form on Friday night when he won the opening Supersport race by 0.8 seconds from Englishman Martin and Amor.

Seamus Elliott took the 250cc honours, ahead of Neil Kernohan and Cowton.