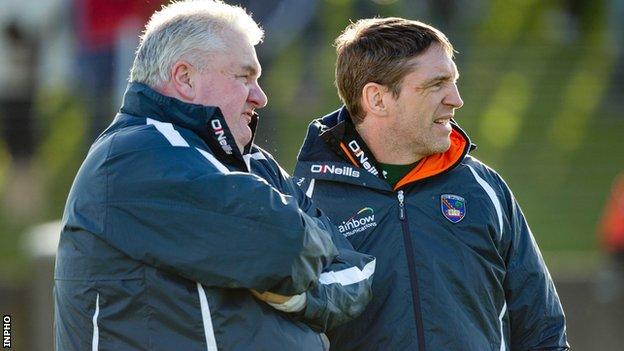 Paul Grimley has stepped down as Armagh boss after two years in charge following Saturday's All-Ireland quarter-final defeat by Donegal.

It was reported last month that Grimley intended to take a break from the game after this year's championship.

It is expected that former Kildare boss and Armagh All-Ireland winner Kieran McGeeney will take over as manager.

Grimley brought McGeeney into the Armagh set-up last October as a coach after they worked together at Kildare.

"Paul strenuously argued that it was the right thing to do as he had stressed on his appointment two years ago that he would embark on a development process and that he thought that the process was ready to progress to another level," Armagh said in a statement.

"Paul Grimley is big in stature and gargantuan in his commitment to Armagh.

"He has asked for a period of rest and has expressed a desire to be able to relax with his family over the next few weeks."

McGeeney was seen as a natural successor to Grimley following his appointment to the county backroom team.

Armagh were relegated to Division Three of the Football League in April but they went on to impress in their championship campaign, reaching the Ulster semi-finals before qualifier wins over Tyrone, Roscommon and Meath.

There was also controversy, with three players suspended in the wake of pre-match fighting in the Ulster SFC clash encounter against Cavan.

The Orchard county imposed a media ban after claiming that some of the reporting of the row contributed to the bans.

Grimley, who was assistant to McGeeney with the Lilywhites, has been involved in management for 13 years.

The 56-year-old was also assistant to former Armagh manager Paddy O'Rourke, who he replaced as senior boss in July 2012.