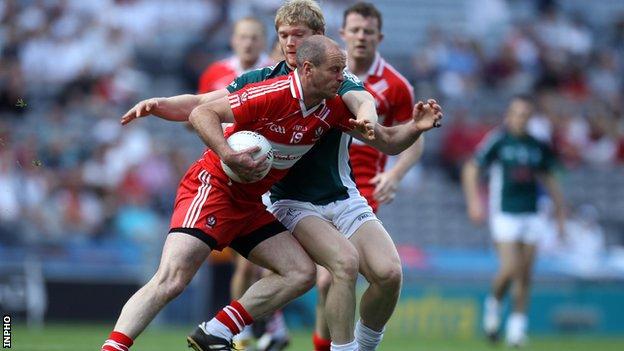 Former Derry footballer Kevin McCloy has thanked medical staff for their "life saving efforts" after he collapsed during a club game last week.

The All Star expressed his gratitude to all those who treated him on the pitch in Owenbeg after falling ill during Lavey's SFC tie against Magherafelt.

In a statement on Lavey's website, McCloy and his wife Cathy praised staff for their "quick thinking" actions.

The rescheduled club championship tie will be replayed on Thursday night.

McCloy and his wife revealed that his condition is improving and asked those will attending Thursday's game to support a fundraiser for the Cormac Trust.

"Kevin and Cathy would like to thank all the physio's, doctors and paramedics for their quick thinking and life saving efforts at the scene. It was these actions along with the defibrillator that ultimately saved Kevin's life.

"We would also like to thank everyone for their prayers and support over the last week.

"Kevin's condition is improving thanks to the excellent care he is receiving at Altnagelvin Hospital.

"We would ask that everyone would support the Cormac Trust at Thursday's match, in whatever way they can.

"Lastly, good luck to the boys on Thursday night."